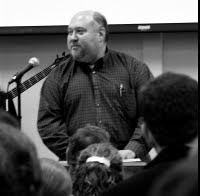 Sometimes the blogosphere goes deeper - The Internet Monk is one of my favorite blogs to read. I don't always agree with him, of course, but he provides a regular dose of mental stimulation on a wide variety of issues related to American Christianity.

Well, for the past few months, its author, Michael Spencer, has been going through the diagnosis and treatment of brain cancer. He's had a handful of guest bloggers filling in for him in the meantime. His latest update reads thus:

My situation is serious. Sleep is a big issue. I need rest and it is hard to get. This cancer situation is not going to give my old life back. It may take the life I have. I choose whatever mission God has for me, the utmost need is a simple prayer on my behalf.

If what I am going through reminds you of what you have been through what you what been through in the past, I pray for you and hope others will be the same.

I am home most of the time but I am on the road on almost every day to various doctors. Tomorrow I finish my first found of chemo and have a fell week off. I am so proud to have come through radiation and to this point.

Thanks for all donations. I will no longer be able to acknowledge them through Paypal. Denise will try to acknowledge all that come via denisespenc@gmail.com.

Once again: Very, very serious. Pray, give and pray. Thanks to all who are buying the book in advance. It will be at Amazon but eventually everywhere. Almost 100% new material.

This post took almost an 3/4 of an hour to write and correct. That’s how much I have changed.

From what I understand, he's already had to give up his position of 15+ years in teaching and chaplaincy at a private Baptist high school, and the insurance money is running out. He does have an account set up for donations as well.

Even though I've never met Spencer, it's one of those things where you feel connected through his writings. The impact that this has had on his family is unimaginable. I don't know how much of my audience (such as it is) intersects with his, but he could use whatever help, thoughts, prayers, etc. that could be given.

Saying "I hope he fails" without actually saying it - The Detroit Free Press used to be my source of choice for Michigan sports-related news, mainly of the Tigers and Wolverines variety. Then it finally dawned on me that the columnists there don't actually seem to like the Wolverines that much, and thus the site is quite a safe haven for Spartan, Buckeye, and WVU fans. Exhibit A is the difference in coverage between RichRod immediately dismissing Justin Feagin from the team for drug-related infractions vs. the Freep's near-glossing over of Mark Dantonio letting Glenn Winston, convicted for assault, back on the team. Exhibit B is the "expose" written by Michael Rosenberg on alleged practice time infractions by RichRod and staff.

Here comes Exhibit C, by perpetual Michigan-hater Drew Sharp, who has decided to condemn RichRod for recruiting Demar Dorsey, a highly-rated safety who was tried but acquitted of several burglary charges a couple years ago. He has implied if not outright suggested that Dorsey probably got away with a few other burglaries at some point, and probably will again, basically. I'm not providing a link to any of this because I don't want to give them hits. However, MGoBlog provides links and commentary on the issue:

So because twits like Sharp will misrepresent hypothetical Dorsey misbehavior it represents a risk that Rodriguez shouldn't take no matter how long Vance Bedford has known the kid—over a year—and how flimsy the sketchy past angle is.

For this he spends two days dragging an innocent—literally—kid's name through the mud. So he can have attention.

Here's the thing: Rich Rodriguez cares about his players. When he left West Virginia, they were the only people in the state to defend him. When the NCAA stuff came down and Rich Rodriguez had his press conference about it, he hit his shakiest, teariest point when he was talking about the effects this had on his players. When you listen to Mike Barwis talk about Pacman Jones, the pain is evident—they just couldn't straighten him out enough. He has a good track record. He was right about Pat Lazear, and his disciplinary record over the past five years is considerably above average. Every time he picks up a guy with a rough past and puts him in college he's trying to make the kid's life better.

And yet he gets painted as a bad guy by people who don't care about anything but themselves. Drew Sharp is a selfish, cynical bastard. He's made a career out of making people angry with his half-assed, research-free opinions. He's a disgrace to journalism. If the Free Press had any scruples whatsoever, rampantly bashing a kid with no evidence, or even an effort to collect any, would be so far beyond the journalistic pale that no combination of weasel words could save him.

I understand newspaper columnists being homers for the local teams. After all, I live in NE Ohio, where they make up reasons to put LeBron on the front page. But the thing is, they support ALL local teams here. They don't try to build up Ohio State while tearing down Akron or anything like that. If nothing else, it's a matter of degrees: "Yeah, Go Zips...BUT GO BUCKS!!!" Even the in-state rivalry between Cleveland and Cincinnati teams doesn't seem to be overly harsh...people just get excited for those games. The only exception might be between Buckeye fans and Bearcat fans, but that's even a recent thing. But I can't wrap my mind around how Freep columnists can justify the blatant double standards (i.e., RichRod/Feagin vs. Dantonio/Winston) and not just engage in healthy rivalry talk...no, they look for any hint that RichRod truly is the embodiment of evil.

Moreso, I can't imagine the amount of crap that RichRod has to let roll off his back as a result. I mean, yeah, he's had two losing seasons in a row. But some people just like to pile on needlessly.
By Jeff Nelson
Email ThisBlogThis!Share to TwitterShare to FacebookShare to Pinterest
Labels: Linkage, Small Sips, Sports
Newer Post Older Post Home