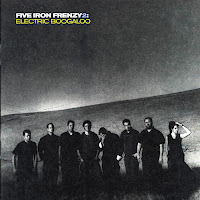 In late high school through most of college, I listened almost exclusively to Christian music. Coincidentally, the industry seemed to be enjoying a boom period around that same time, as bands like Jars of Clay, dc Talk, and the Newsboys were at the height of their popularity and even enjoying some mainstream success.

Not so coincidentally, I was going through a time of self-discovery, or one of many. By my senior year of high school, I was exploring my identity on several fronts at the same time.

I was getting serious about my faith as a Christian and trying to figure out what that meant. At the time, it meant contributing some of my "secular" CDs to a bonfire that the youth group at the Assembly of God church were organizing. I bought and started reading my first Bible, an NRSV Student Bible that I still have and treasure. I started attending the chapter of Fellowship of Christian Athletes that was also open to non-athletic types such as myself. I and my high school crew would have many long theological discussions over euchre and pizza, and we'd frequently head to the local Christian bookstore and stock up on the latest releases from our favorite bands.

I was also beginning to explore my chosen vocation as a pastor. I hadn't been settled on this decision for very long, but I was already getting really excited about it. So I'd looked into college religion programs and started trying to figure out the In Care process of my denomination.

And if I'm being honest, my high school girlfriend had left for college that year, and I was feeling a little more free to explore these other things; to figure out who I was at that time. The less I type about this piece the better.

This path of self-discovery continued when I went to college, the Christian music boom still in full effect. My freshman year I had Jesus Freak and Much Afraid on constant rotation. My new Christian friends were also helping me to broaden my musical horizons, in particular introducing me to ska music and its up-and-coming Christian flagbearers, The OC Supertones, The Insyderz, and Five Iron Frenzy.

I fell in love with ska, and picked up every album I could find from these three bands, but also a few others. The Supertones were from California, and while their early style was smooth and laid-back, their lyrics challenged church disunity and called for Christians to study up on their doctrine to fight the good fight. The Insyderz were from Detroit and had a much harder edge to their sound. Five Iron Frenzy was all about goofy fun, making fun of themselves but also touching on serious themes such as the persecution of American Indians, rampant American consumerism, and Christian hypocrisy.

The height of my ska fandom existence came in the fall of 1998, when these three bands went on tour together for "Ska Mania." It was one of the most high-powered, amazing concerts I've ever attended. At the time, I was much more of a Supertones and Insyderz guy, but the whole thing was awesome. Five Iron Frenzy all came out dressed like characters from Star Trek, which I thought was cute, but wasn't able to get into as much.

As all bands are wont to do, each of these groups changed and evolved. I think that changes in my own sense of self affected how I heard these bands as well. By my senior year of college, The Insyderz seemed to be drifting away from a ska sound, opting for more of a hard rock or even pop sound. They seemed to be hemorrhaging horn players, so that might've played a role.

The Supertones, likewise, were changing, seemingly becoming more of a rap-rock group. In addition, I was becoming uncomfortable with their increasingly militant lyrics: lots of talk about revolution and going out to save the heathen by bashing them over the head with apologetics. In my own spiritual growth and exploration, this version of Christianity made less and less sense to me.

Five Iron Frenzy evolved as well. Their message remained pretty consistent, but they began to toe the lines between ska, rock, and pop. Nevertheless, I continued to resonate with their overall style, moreso than I had earlier on. Eventually they were the only group out of the three that I continued to follow, and remained one of the few artists deemed "Christian music" that I listened to after I left that entire phase. Again, this had to do with my sense of self as much as my musical tastes: for me, FIF's message and overall presentation continued to make sense. They were one of the few bands from that phase that seemed to do more than rattle off a string of cliches over watered-down pap, which is what the genre had largely become for me. But this group's honesty, transparency, self-deprecating humor, and willingness to address social issues made them an enduring favorite.

In late 2003, Five Iron Frenzy broke up. For whatever reason, I was late in finding out about this, and sought out their final album, The End is Near. By the time I had picked it up, it had been paired with a recording of their final show, which brought me to tears the first time I heard it. That's how much this group's music had come to mean to me. They had, after all, helped provide the soundtrack for a time of self-discovery and growth. They also remain one of the few enduring cultural artifacts from a time in my life that, while remembered for many moments of joy, friendship, questioning, laughter, and maturation, is also littered with regret, painful conflict, ridiculous drama, and my and others' immaturity.

Seven years later, members of the band and some fans have put together a documentary DVD, The Rise and Fall of Five Iron Frenzy. The official release date is April 13th, but pre-orders (one of which I have secured) will be sent out March 19th. As I continue down this Lenten road of reflection and cleansing related to the period during which FIF played such a big role, I find it fitting that I'll be able to view this film in the midst of it. I'm thankful for the part that their music has played in my life. They'll always be one of my favorites. 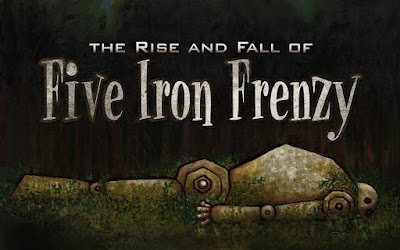