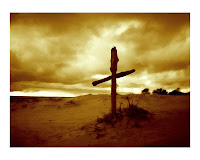 Lent is only two weeks old, and I'm already looking at the long month of March that is ahead.

It's not that the discipline is going badly. I'm rather enjoying it, to be honest. It was the right thing for me to choose. And it's not that my Communal Word experiment is going badly either. After some gradual wading into the process, people have been very willing to share and participate.

It's really too bad that Lent will last all March long. I can promise you that whether you give something up or take something on there will come a day in the middle of the month--that long, holiday-free month--when you wonder why you made that apparently seemingly brilliant choice and how you can talk yourself out of it.

But Lent is long. Lent is dreary, especially here in Maine. We slog through muddy March, or some years we wish the snow would for heaven's sake stop! We wish Easter would hurry up and get here.

Again, it's not a discipline-related thing. But looking at March spread out before me, I see the long road to be traveled.

I think that it's really because I have other stuff on my mind.

March 29th is the ten-year anniversary of a very important faith-related event for me. I'm trying to figure out how to mark it. The past month or more, I've been rehashing everything that led up to it; that made it necessary for me. I've been going through some of the "woulda shoulda coulda" type stuff where I wonder how things would have gone if I'd just zigged when I zagged.

One of the craziest things I've discovered? I'm Facebook friends with a couple people who were involved in those events, and while we've long reconciled, I've recently come to realize that they've greatly mellowed with age and life experience. Their incarnations today may not even flinch at some of the stuff we butted heads over years and years ago. And that brings me some strange form of relief that is probably something else, too. A feeling of vindication, maybe? I don't think it's that self-centered. It's just...peace. It helps me let go.

So there's been this slow process of cleansing related to that time that has been happening the past few months. I think it is no small coincidence that it's been happening leading up to the 29th. I also think it quite fitting that this process is now happening during Lent.

And so, if you'll indulge me (and even if you won't), there'll probably be a few posts about this leading up to the 29th. I may try to re-write my account of those months so long ago. I have good intentions about it, anyway.
By Jeff Nelson
Email ThisBlogThis!Share to TwitterShare to FacebookShare to Pinterest
Labels: My Journey (so far)
Newer Post Older Post Home