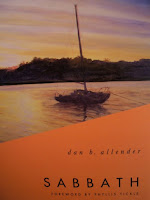 This week I've been reading Sabbath by Dan Allender. This is part of the "Spiritual Practices" series of books for which Brian McLaren wrote an introductory text; other volumes include one on fasting and one on prayer. The question on the back of the book was what reeled me in: "What would you do for twenty-four hours if the only criteria were to pursue your deepest joy?" Allender argues that the Sabbath is more than a "day off," and not really a day meant to devote to prayer, piety, and self-denial, either. He offers an interpretation of the first creation story where God rests on the seventh day not because God is worn out and needs a break, but because God is taking a day to sit back and delight in what has been created. Allender offers this as a model for Sabbath; that it's not about keeping rigid rules or taking a break, but instead being intentional about delighting in creation, however that may look for each of us. I thought it was a good premise. Having almost finished the book, however, the chapters are starting to run together a little bit, and getting redundant.

I had a new section of For the Love of God to read for my book study. I don't like this book. I haven't for a while. Yesterday I was able to articulate why. This book draws from a huge spectrum of authors who claim a wide variety of religious and spiritual backgrounds. Many contributors are Buddhists, or are devotees of other Eastern faiths. Nothing wrong with that, as far as I'm concerned; that part doesn't bother me. What bothers me is that while I have a very basic understanding of these faiths, I need more background in order to understand how and why they use the terms that they use. A couple of them offer the briefest of explanations for what they mean by "God," but not all of them do this. And so many of them make "We are God" or "I am God" statements that can be quite jolting to Western eyes and ears if one doesn't understand the background behind the statement. So I've been grumbling and grumbling about this book for this reason, and then I got to Joseph Goldstein's chapter, entitled, "Awakening to the Dharma," which takes time to explain that the closest thing to "God" in Buddhism is the Dharma, which is the concept of being and experiencing life at a non-conceptual level, i.e., rather than thinking, "My knee hurts," which is a statement about how one experiences pain, there is only the experience of pain itself. So when one of an Eastern faith says, "we are God," s/he is talking about this fundamental, non-conceptual experience of existence, of which we're a part. This chapter should have been put at the very beginning of the freaking book.

Rethinking Youth Ministry has been added to the bloglist.

Here's the trailer for the Five Iron Frenzy DVD:

Lately I've been enjoying this song from Placebo, "Running Up That Hill:"