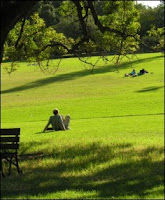 The time for my sabbatical has finally come. It begins a week from today, and will last through May 30th. I will have five weeks of rest and renewal.

Almost from the time I began at my church, it seems, I began thinking about the possibilities for this time. Of course, in comparison to other pastors who have earned sabbaticals, mine will not be that long. Along with that has been the arrival of Coffeeson, so a month-long trip to Europe or some other grand plan like that was taken off the table a couple years ago. Nevertheless, I kept wondering what might be meaningful and worthwhile for this, and I came up with two main questions that seemed appropriate to think about.

First, after so long in one church, how do you keep things fresh and vibrant? After this long in one place (5 1/2 years), many pastors start thinking about updating the profile and seeing what else is out there. The answer to how to keep things new, they may say, is to go to a new church. For a variety of reasons, this is not an option for me, the chief one being that I'm just not finished here yet. So for those of us who aren't ready--who aren't called--to move on, how does one keep the creative energy going in order to keep doing effective ministry after so long?

I think this question can be answered on several fronts. The first is simply exploring new possibilities to do the familiar things or to do some new thing: books, workshops, swapping ideas with colleagues, etc. The second is to find a stimulus for oneself: a hobby, further education or training, a justice cause, something that will not only encourage one's own creativity but help that creativity translate into ministry.

I'm going to think mainly about the stimulus part. Coffeewife completes her nurse practitioner degree in another year, at which point she'll turn to me and say, "Okay, your turn." At this point, I'm thinking about so many possibilities that no one of them stands out. A D.Min? Some other degree? Certification in spiritual direction? More CPE? What might I want to focus on in order to keep the creativity flowing, as well as further my own sense of call?

Second, I look around at some of my colleagues who have been in their churches for 10 or 15 years, and I think, "How do they do that?" Part of the answer has to be what I've already mentioned about doing new things every few years. And I can't think of one of them who hasn't taken a sabbatical, so that has helped as well. But staying anywhere, church or whatever else, longer than 5 1/2 years is just not a part of my life experience. I've been conditioned to expect to move on after this long. How does a pastor stick around for a while?

So those are The Issues. Now I'll tell you briefly about how I hope to think about them.

First, I have a couple programs lined up. Very early on I'll visit Midwest Ministry Development to experience a program called "Health and Excellence in Ministry." This program explores issues of pastoral health (physical, mental, spiritual, relationships, etc.) and encourages good habits, the idea being that health translates to excellence in ministry. I've heard nothing but good things about this program.

The other big program is The Festival of Homiletics. I've always wanted to go, but have never been able to for various reasons. In one place will be speakers such as M. Craig Barnes, Lauren Winner, Thomas Long, Otis Moss III, and many more. Plus I've never really been to Nashville before. So that'll be cool, too.

Oh, and I have a reading list. No one who follows this blog is shocked. It is as follows:

Under the Unpredictable Plant by Eugene Peterson - Peterson uses the story of Jonah to explore issues related to pastoral vocation, and calls pastors not to run away from what they should be doing in favor of what's comfortable or what furthers one's own career at the expense of the church.

In It for the Long Haul by Glenn Ludwig - This is from the Alban Institute, and is all about what goes into sustaining a long-term pastorate.

Leaves from the Notebook of a Tamed Cynic by Reinhold Niebuhr - Excerpts from Niebuhr's journals during the first few years of his pastorate, where he discovers that pastoral ministry is nothing like what he thought it would be, good and bad.

And that's it. I kept the list short on purpose. It's only five weeks; it's not like I'll have time to read Barth's Church Dogmatics or anything.

So that's what I'll be thinking about and doing. There'll be other things as well, but these are the big ones.
By Jeff Nelson
Email ThisBlogThis!Share to TwitterShare to FacebookShare to Pinterest
Labels: Sabbatical
Newer Post Older Post Home