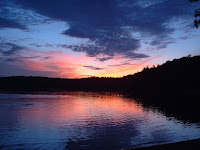 "I wonder if the strong sense of frustration which comes over me so frequently on Sunday evening and to which many other parsons have confessed, is merely due to physical lassitude or whether it arises from the fact that every preacher is trying to do a bigger thing than he is equal to -- and fails. I have an uneasy feeling that it may be native honesty of the soul asserting itself. Aren't we preachers talking altogether too much about what can be proved and justified only in experience?" - Reinhold Niebuhr, Leaves from the Notebook of a Tamed Cynic

I had lunch with a colleague and mentor the other day. He's experiencing a certain amount of flux and anxiety in the setting in which he works, and together we processed both some of that and some of what I've been thinking about lately. Originally, I'd wanted to process some stuff about whether I should get a D.Min vs. another degree vs. whatever, but I didn't really feel like doing that and thus was worried that I was about to waste his time. Instead, I told him about Eugene Peterson's book and Glenn Ludwig's book and walking the labyrinth and the Festival of Homiletics, and he offered responses here and there.

In the end, there was one thing that he said that I'm still thinking about: "The church is pregnant with possibility, and while I probably won't be much involved in it, people like you will be called to be midwives."

I found this statement to be both invigorating and terrifying, but I must admit that the invigoration greatly outweighed the terror. Change is what I know; for the most part, I accept it. But it makes a lot of people incredibly anxious. It puts a lot of people on the defensive while they wish for the former things that are no longer possible. People called to lead others through change can be put in a tough position by how that anxiety plays out: they can be made targets and scapegoats. It's irrational, but it's human nature.

Stories from the exodus have turned up in several places for me lately. The first was during the Festival of Homiletics, when Craig Barnes observed that Moses didn't actually lead the Hebrews into the promised land - he only led them to the edge. And it was really God who was doing the leading anyway. Moses' job was to guide them and show them the daily manna; the work that God was doing among them along the way.

The second Mosaic reference was during this lunch, when my colleague also mentioned Moses not actually leading the people in, but showing them the way through the wilderness. This is increasingly a wilderness time for the church, and daily manna may be harder to see.

Along with these stories of Moses comes Reinhold Niebuhr, who discovered the feeling of frustration within himself and attempted to name it by exploring his tendency to try doing too big a thing. I can relate. I strain myself to preach, teach, envision, and call on others, often with some intention of leading people into the promised land rather than simply loving them and showing the daily manna. But at times, even that is too big, or I try to do it in too big a way. I often try for something spectacular, or hard-hitting, or "relevant," or well-programmed when it is often the humble, the gentle, the simple, and the organic that actually has worked.

In light of that, Walter Breuggemann's quote has been stuck in my mind and has rung true more often than not:

"The world for which you have been so carefully prepared has been taken away from you, by the grace of God.”

I learned a lot of good, worthwhile things in seminary. But I didn't learn that the world of ministry that I'd be entering would be vastly different. I didn't realize that I'd be heading into the wilderness rather than the Temple; the shifting sands of the desert rather than the firm foundations of Jerusalem. I didn't fully realize or appreciate this truth until a little over a year ago. Before that, I either tried to do the traditional programmatic things or tried to make changes without fully understanding why change needed to happen, other than "the old way doesn't work."

Now I know what I'm dealing with and what my entire venture in local church ministry is probably going to entail. And now that I know that, I kind of like it out here in the wilderness. Not many do. But so long as we have daily manna, we'll be fine.

Sunday is my last day of sabbatical. It is the last day of a five-week journey of rest, of surprises, of plans fulfilled and frustrated, of rejuvenation. It is my last chance to worship elsewhere for a while. It is my final day without the familiar rhythms of ministry that mark a typical week for me. On Monday morning I will meet the local chapter of the American Legion in the church cemetery for a brief Memorial Day service. It will be my first official action as a pastor in five weeks. On Tuesday, I'll return to making phone calls, setting up visits, preparing a sermon, attending meetings, and thinking about upcoming programs.

In the midst of doing that, I'll engage this work with a different mindset. I'll have more appreciation for the small things; for the bits of manna that turn up as we struggle along together to be faithful in a rapidly changing world. I'll be even more aware of those things in ministry that bring me joy, which are plentiful, even in more frustrating times. I'll seek that joy in the tangible practice of ministry rather than in the abstract idea of it, with the real people I'm with rather than the perfect people out there somewhere who don't exist.
By Jeff Nelson
Email ThisBlogThis!Share to TwitterShare to FacebookShare to Pinterest
Labels: Church, Ministry, My Journey (so far), Sabbatical
Newer Post Older Post Home