Tarshish is a Lie 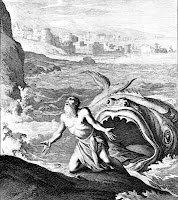 In his book Under the Unpredictable Plant, Eugene Peterson interprets the story of Jonah in light of the pastoral vocation. Jonah is told to prophesy in Nineveh, a detestable city in many respects, and certainly a city that Jonah finds unlovable. And he not only resists God's call to go to Nineveh; he doesn't just pretend that he doesn't hear God or put off going. Instead, he heads in the opposite direction to sail to Tarshish. Peterson describes Tarshish as an exotic place full of culture, romance, intrigue, and adventure. It certainly was preferable to Nineveh. So that's where Jonah decides to go.

Of course, he never makes it. A storm hits, he has to be thrown overboard, he prays in the belly of a big fish, and eventually does go to Nineveh where he belongs.

Pastors, Peterson says, all want to go to Tarshish. Tarshish is a paradise, with wonderfully perfect and obedient congregations serving in all sorts of efficient, polished ministries. But, he continues, "Tarshish is a lie." Spend enough time in one church, and one quickly finds that it's just another Nineveh, filled with imperfect people struggling with their own lives (to say nothing of their church commitment). So a pastor's tendency is to buy another ticket and look for Tarshish somewhere else.

This approach to congregational ministry lacks an appreciation for place, for context. Peterson observes that a pastor can't engage in ministry without the specifics of where they are located. Ministry is about these people in this place right now, rather than some ideal group of people somewhere that ultimately doesn't exist. He even goes so far to encourage a reverence for place and for the particulars of people's lives; to help identify where God is even in the midst of the mundane, the mediocre, the tedious.

In part, I picked up Peterson's book on a whim. I saw it recommended on another blog and thought it sounded interesting enough to be incorporated into my sabbatical musings about long-term pastorates. It has proven to be far more relevant than I ever thought possible, and helped set the right tone for this time.

It's not the only thing that I've already done in relation to this reflection. Last week I also traveled to Columbus for a couple days to go through a program called "Health and Excellence in Ministry," offered through Midwest Ministry Development. This, too, was on somewhat of a whim (an expensive whim, but still a whim): My Association has been in dialogue with Midwest for this program to be held in a group format in the fall, given that it has received glowing reviews from all who have participated. I didn't know much about content, other than it connects a pastor's personal health to excellence in his or her vocation.

I came to realize that this program is more than that. To be sure, there were some familiar elements concerning healthy boundaries and what my Meyers-Briggs result says about my ministry style, but there was also a lot about support systems, not taking professional criticism personally, and, most importantly, always operating under the belief that God can and does show up in the midst of one's ministry with the congregation. We also discussed the "cycle of change:" the life cycle of any given church program from exploring ways to address a need to the height of its productivity to its decline, all the way to the choice whether to begin exploring again or to opt out altogether.

It was an informative and helpful couple of days, though I must admit that I found some of that value in the one-on-one format; the ability to dialogue with a counselor as opposed to the group format.

I've seen many tie-ins between Peterson's book and this program. Both touch on being slow to opt out of a church due to frustration, boredom, a low-energy season, or a supposed better opportunity elsewhere. Rather than do that, both encourage exploration: of people's lives, of opportunities for the church to engage in ministry and mission, of one's own tendencies to resist going to or staying in Nineveh for the appointed time.

The counter-argument to this may be that there just comes a point where nothing further can be done; when the time truly comes for pastor and church to part ways. Peterson does acknowledge that, but states that pastors should weigh whether that is really the case, or whether it's just a valley in a series of peaks and valleys.

Above all else, both Peterson and this program encourage pastors to trust that God will show up. The way that "excellence" is defined at Midwest is a little different that how one may commonly conceive it. Rather than a corporate term for efficiency and polish, it is used in terms of one's ministry making an impact. The way Peterson puts it is walking with a person in their anxiety, despair, or joy, and not only showing up but actually helping one make a connection between that person's story and God's story.

To do that, a pastor has to be willing to stay put for a while; to appreciate and love where one is in all its particulars, brokenness, and imperfection. Tarshish is a lie; Nineveh is where God wants us.
By Jeff Nelson
Email ThisBlogThis!Share to TwitterShare to FacebookShare to Pinterest
Labels: Bible, Church, Ministry, Sabbatical
Newer Post Older Post Home