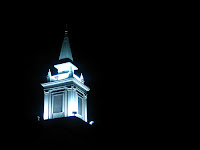 He allowed his weight to do most of the work as he eased back into the driver's seat. A turn of the key and the engine awoke. A flip of a lever and his dashboard glowed a soft orange. He wasn't quite set to take off the brake. Instead, he savored the escape of a sigh that felt like it had been building up for years.

He looked back toward the store he just left. An entire building filled with the knowledge and experience of others printed and bound for the world's consumption, and to him all those words were as thin as the pages on which they were written. Tens of thousands of gallons of ink spilled and not one that satisfied his thirst. Tens of thousands of trees harvested and not one that gave more than a superficial pep talk, a 12-step list to better times, a study of more words from another book.

He had no more breath to waste. He let down the brake and put it in reverse.

A new CD sang to him, fresh out of the shrink wrap. A live set from a lesser-known artist. The guy at the cash register had asked about it. He made an attempt at an explanation. The cashier wouldn't give it a second thought after he left. The guitar wove in and out from behind the bass and drums as he wove around a slow-moving Toyota. He took a quick glance...ice cream. The guy was trying to juggle an ice cream cone with the steering wheel. Brilliant. And this after he had to wait for the long line of cars in the other lane to pass them both. He was always the one stuck as everyone else showed a little more initiative. One day he'd fix that.

He pulled into the driveway, the garage lighting up as the door rose. A few more bars of the song before the engine came to a rest. He collected his newest acquisitions and made his way toward the front door.

Except this time he lingered.

He gazed up at the steeple next to him, immersed in bright white spotlights for traffic to see. It pointed to a dark overcast night. No stars. Only the glow from a nearby town.

The night was warm enough for a pause, warm enough to wonder about what all those words were trying to define, what this steeple was trying to direct him toward.

He waited, plastic bag softly crinkling in the breeze, as if some heavenly bus was going to swoop down and deliver a real answer.
By Jeff Nelson
Email ThisBlogThis!Share to TwitterShare to FacebookShare to Pinterest
Labels: Vintage CC
Newer Post Older Post Home