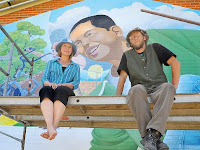 This can't be a real thing, can it? Apparently it can:

"A group of artists has been asked to lighten the faces of children depicted in a giant public mural at a Prescott school. The project’s leader says he was ordered to lighten the skin tone after complaints about the children’s ethnicity ….

R.E. Wall, director of Prescott’s Downtown Mural Project, said he and other artists were subjected to slurs from motorists as they worked on the painting at one of the town’s most prominent intersections.

“We consistently, for two months, had people shouting racial slander from their cars,” Wall said. “We had children painting with us, and here come these yells of (epithet for Blacks) and (epithet for Hispanics).”"

I guess we've reached the breaking point in this country, where so much change and diversity has occurred that people who can't deal with it are going to cope in stupid, destructive ways. Sure, this kind of thing has been around forever, but it seems to have been ramped up the past few years.

It breaks my heart to think of the kids depicted in this mural (it's mentioned that this mural has faces of real kids who attend the school) having to hear and watch this go on, especially now that the mural will be changed: "Sorry, but you're the wrong skin color. But we'll get it right on the picture, at least."

The school also has no balls. Schools should in part be about protecting their students, not giving in to the people yelling violent slurs at them.

Unfortunately, this episode has in part been stirred up by a local politician with a radio show:

The ranting of one city councilman seems to have revved up the controversy in the community.

"Art is in the eye of the beholder, but I say [the mural] looks like graffiti in L.A.," Councilman Steve Blair said.

"I am not a racist individual," Blair said on a radio show last month, "but I will tell you depicting a black guy in the middle of that mural, based upon who's President of the United States today and based upon the history of this community, when I grew up we had four black families - who I have been very good friends with for years - to depict the biggest picture on that building as a black person, I would have to ask the question, 'Why?'"

The "black guy" in the mural is based on a student of Mexican descent, a school official said.

A picture of a hispanic child looks like graffiti. Fun fact: a lot of city murals are painted to prevent graffiti. You're going to equate a picture based on a student in your community with graffiti?

And what does "based upon who's President of the United States today" mean? We have a black president. Black and hispanic kids go to your elementary school. The better question is "Why not?" And if the best answer is "because it makes white people angry," then you really need to explain how that can be taken as anything other than racist.

This is America in 2010, an America many claim is "Christian." Well, Jesus is bawling his eyes out because you're getting it so incredibly wrong.

Update: The principal of the school has changed his mind, and the mural won't be changed. Thankfully, such realizations still happen.
By Jeff Nelson
Email ThisBlogThis!Share to TwitterShare to FacebookShare to Pinterest
Labels: Justice Issues
Newer Post Older Post Home