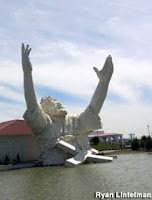 No, I don't mean at Notre Dame. I mean a big silly landmark down in Monroe, Ohio:

MONROE, OH (WXIX) - The "King of Kings" statue along I-75 in Monroe, OH was struck by lightning Monday evening and became engulfed in flames, according to eye witnesses.

The statue of Jesus in Monroe, dubbed the King of Kings by the Solid Rock Church where it resides, was struck by lightning during the severe storms on Monday.

Fire crews are on the scene were on scene throughout Monday evening attempting to put out the fire.

The statue nicknamed "Touchdown Jesus" is made out of wood and Styrofoam.

The statue also had a steel frame anchored in concrete and fiberglass.

When driving down in this area, I would make fun of this thing. A lot. He looked like he was coming out of the ground to eat your children. The local nickname "Touchdown Jesus" was fun, too. Buckeye fans would inadvertently make fun of it by getting their picture taken with it while spelling out O-H-I-O, using the statue for the H.

I got in an online argument a while back with a member of the church that produced the Statue of Liberation Through Christ, a replica of the Statue of Liberty, except she's holding a cross and whatever. At that time I argued that the money used to build that monstrosity would have been better used in outreach and help to the poor (among many examples that don't involve erecting a huge eyesore). She said that of course the statue was worthwhile: it was obviously an outreach tool that would call America to go back to its Christian heritage, and it would surely convict many hearts to such a cause.

I recall that conversation as I read of this statue's destruction. People in Solid Rock Church obviously thought that building Touchdown Jesus was a good idea, and they probably thought along similar lines that this statue would convict hearts and be a rallying point for other Christians. They were at least right on the second point, as this statue received quite a few visitors over the years. So they could justify spending the money based on those and other related reasons.

I maintain that it was a silly project and that the money could have been used in more Jesus-serving ways than that. We read plenty of verses in scripture about using resources to help the poor, but there's a notable absence of verses telling us to build giant Jesus monuments or Statues of Liberation or whatever else in order to hopefully convict someone by their huge well-meaning gaudiness.

I also doubt that all the usual people who come out of the woodwork to proclaim this or that natural happening as a sign from God will say much about this one.
By Jeff Nelson
Email ThisBlogThis!Share to TwitterShare to FacebookShare to Pinterest
Labels: Church, Funny If It Wasn't So Sad
Newer Post Older Post Home