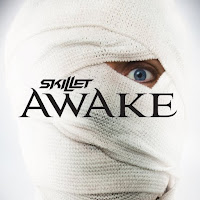 I started reading Bram Stoker's Dracula the other week, but I haven't made a lot of progress. I've just been preoccupied with other things. It's weird, because I've seen most of the movie that purports to base itself directly off this book rather than popular renderings, and already I know that Count Dracula looks different than he did in that movie. What has surprised me so far is that this book is written as a series of journal entries and letters from different characters, rather than as a narrative. This same sort of eye-opening thing happened when I sat down to read Mary Shelley's Frankenstein: the popular version is nothing like the book.

I've been on a Skillet kick lately. I picked up Awake the other week. It's their latest, and it's okay. The reason I picked them up again in the first place was because their music punches me in the face. Unfortunately, Awake is less face-punchy. A couple songs are such, but it's more mainstream in comparison to the two albums before that, which I picked up this week. Comatose was their breakthrough/crossover album, which has more face-punch quality to it. Not only that, but they're pretty socially aware: "The Last Night," for instance, is all about someone dealing with depression, as well as those around her telling her "Oh, it's a phase; you'll feel better soon." The album before that, Collide, has an abundance of face-punchiness, and I enjoy listening to it at an unreasonable volume.

I also picked up the Black Keys' latest album, Brothers. It's their familiar power duo stomp-rock sound, though with some added funky elements, much like Attack and Release and their Blackroc project. They seem to grow so much as artists on each album, and I become a bigger fan with each album as well.

The MTV Movie Awards are coming up on Sunday. Coffeewife shared this video with me of Robert Pattinson having a conversation with Les Grossman (Tom Cruise's character from Tropic Thunder):

And I don't know what this is exactly, but I was amused by it: