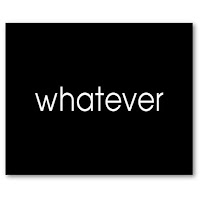 It's Vacation Bible School Week. Normally I wouldn't consider this a huge deal, as in years' past I'd show up to pray near the beginning and then spend the rest of the time swiping cookies from the kitchen. This year, I have some added responsibility as Bible Teacher Guy: I tell the daily Bible story, with sets and props and audience participation and stuff. Five days' worth of such things take more time to prepare for than one may imagine: I've had to hunt down supplies and have spent a lot of time drawing background scenery on newsprint. Two nights down, three to go. It's been fun.

Coffeeson was sick yesterday. Well, at least he was sometime during the night. He woke up bawling around his usual time. The crying was somewhat uncharacteristic, but when I walked in and The Smell reached my nostrils, I figured out what happened pretty easily. I'll spare you the gory details. I say "at least sometime during the night" because he didn't seem to slow down too much once I got him cleaned up. He wanted juice, he wanted his usual food, he wanted to go for a ride in the van, he played with his toys. Coffeewife wonders if it was something he ate. We're both wondering about daycare. This is the second time in three months that he's gotten this sick.

It's Michigan Week on the Big Ten Network. Last night they showed the '98 Rose Bowl where Michigan capped its championship season. Tonight is the '69 Ohio State game. They'll also show the '08 Capital One Bowl and some random game against Wisconsin. This is cool, but also depressing: fall is still over two months away and these games are in contrast to the performance of recent incarnations.
Dave Matthews Band is this Friday. Sweet.

I got a Kindle for Father's Day. The first book I'm reading on it is Mere Churchianity by the late Michael Spencer. I'll say more about that on Friday. I don't know what it is, but reading books on Kindle seems to go faster. Anyone else have that experience?

I wrote this post because I didn't have much of anything else to write at the moment, and I don't want to be one of those bloggers that goes too long in between posts such that it causes people to wonder whether he's still around. Call it dedication, call it obsession, call it not wanting to lose even the modest readership that I have, call it kind of pathetic. It's just a thing of mine.
By Jeff Nelson
Email ThisBlogThis!Share to TwitterShare to FacebookShare to Pinterest
Labels: Quotidian
Newer Post Older Post Home