A Summer of Transition 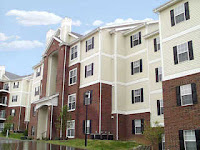 The summer of 2004 was a different kind of summer. Maybe there's a better word than "different," but it's the one that springs to mind as I begin typing this. Maybe after I've made it to the end I'll have come up with a better one.

At any rate, the reason "different" came to mind was because it was the first summer where I wouldn't anticipate heading back to school in the fall. I had graduated seminary in mid-May and would begin looking at open church positions very soon. The bad news at the beginning of summer was that my ministerial profile was far from being ready to distribute. The good news was that I could afford to wait a little while.

I could afford to wait a little while because I was on my way back to my hometown for a two-month gig as pastor of my home church while their regular pastor was on sabbatical. When they'd put the proposal together for a grant from the Lily Foundation, they'd included a paragraph about "securing a seminarian" to fill in during that time. When I saw that phrase, I began to anticipate getting that call with hopefulness. This church had been my spiritual home since junior high, and I wanted an opportunity both to gain some experience during that sabbatical, and as a way of saying thanks for all the support they'd given me over the years.

That call did eventually come, and so I began making arrangements before graduation to head back there at the beginning of June.

I vividly remember sitting down with the pastor in his office shortly before that time started. In fact, it may have been the first day of my time there. He and I talked about basic expectations and practices: I largely would be "minding the store" while he'd be away, doing the typical things such as preaching, visitation, coordinating with other staff as needed, committee meetings, and whatever else.

There were two things about this meeting that stuck out to me. First off, we talked for a couple minutes about funerals. I was especially nervous about the prospect of one coming up and how to handle it: preparing the service, caring for the family, working with the funeral home, and so on. Funerals are one of those things that just pop up and create a handful or more of needs at a moment's notice, so I wanted to collect any wisdom that I could about them just in case.

The second thing that I remember most is going over some pastoral concerns that he thought I should be made aware of. He made a list of some people who'd just entered nursing homes or who weren't doing especially well in some way. As this meeting came to a close, he said, "Well, how about we go ahead and split some of these people up today? You go visit so-and-so, and I'll take these others." When he made that suggestion, the fact that I was pastoring a church became very real to me. And so my career in full-time ministry began.

I got a little of everything during those two months. I did end up having not one, but two funerals, both of which were much less intimidating than I thought they'd be. The first was a woman I don't recall ever meeting over my years of involvement. The second, however, was someone I'd visited every week up to the point of her death. She'd been in hospice care, and always a very pleasant person. I ended up working with both funeral homes in town, and the contrast between them was significant to me as well.

I had a wedding toward the end of my time there, which I co-officiated with an ordained colleague and former pastor of the church. It, too, was a great experience where I was able to observe the ins and outs of coordinating a rehearsal. The bride's side of the family was Laotian, and the ambassador to Laos came to the reception, which I thought was just awesome. The family was very easy-going, and thanked me for my participation. Unfortunately, this couple didn't have a happy ending, as the groom committed suicide about a year ago. Even though I'd only ever met this couple the weekend of their wedding, they had a special place with me since theirs was the first I'd been a part of.

My family got in on the act as well. Actually, they'd been part of the act before I got there. My mom is the youth coordinator for this church, so in effect we were co-workers for those two months (one of the Association Ministers jokingly reminded the congregation that he had a Masters in Counseling in case we needed him). I recall one instance where a recently graduated student's good friend had died, and so I'd counseled with her on how he and his family were doing. My father, an ordained UCC pastor, co-officiated communion with me on my last Sunday. My brother was liturgist one of those Sundays, so I whipped up a dialogue sermon where the disciples James and John argue about why Jesus wouldn't let them smite a Samaritan village.

I stayed at the parsonage during that time. So I was not only filling in as pastor, but I was housesitting and dogsitting as well. They had a golden retriever named Speedy whom I'd take for walks out on the runway of the old airport every morning. The house was a quirky parsonage, complete with a refrigerator that decided to crap out one morning and a visit from a bat. It also had a spacious front porch that I enjoyed lounging on in the evenings, and my favorite room was their den, which has two skylights in the ceiling made to look like lighting fixtures.

In the midst of all of this, I did finish my profile and began my search process for a called pastoral position. On two separate occasions, people from search committees visited Sunday worship and either approached me afterward or called me later in the week. I was in dialogue with a third church near Dayton at which I even ended up preaching, though I eventually found out that they were looking for an interim rather than a settled pastor. My Association Minister went over a list of possibilities in the area as well, including one church not more than 10 miles away from where I was.

My time at my home church came to an end, and I made the long drive back to St. Louis. Shortly before graduation, we'd moved to an apartment in the Manchester area, which we immediately loved because it was way bigger and open than our on-campus apartment. We'd also picked up a feline friend, whom we called Eve (named after the title character in All About Eve, since she was black and white...this is what happens when you marry a psychology major).

The rest of the summer and on into the fall was spent in dialogue with churches. I circulated my profile pretty widely, focusing on Missouri and Ohio in particular. I remember getting one rejection letter after another from Missouri churches...they all wanted somebody with experience, inviting the ongoing question about how one gains experience if nobody will hire you. Ohio churches, meanwhile, were much more promising. As mentioned, I visited the church near Dayton, and had my first phone interview with the church close to my hometown.

It wouldn't be until late fall that I'd find my first settled call (at that church close to home, of course), but I remember loving nearly every minute of that search process. The possibility involved in that process was exciting, and I relished waking up every morning and reading over those church profiles again and again, coffee in hand and Eve on my lap.

It's not all I did that summer, of course. It was a great musical summer, filled with Modest Mouse, Galactic, Phish, and the North Mississippi All-Stars in particular. When I made it back to St. Louis, I exercised religiously and was in the best shape I'd been in in years. I watched a lot of Movies On Demand, and discovered Entourage. I worked at the Eden library because Coffeewife needed me to shoulder at least a little of the financial burden in this in-between time.

That summer and fall probably looked vastly different to Coffeewife, I must admit. She was only able to make it up to see me once during my stint at my home church. Otherwise, she had a manager position at the Red Lobster in Alton, Illinois that she pretty much hated. I did largely get to be a lazy bum toward the end of that summer, and at that point the search process was open-ended. If it'd lasted any longer than it did, she might've killed me, or at least forced me to get a more full-time job, no matter how temporary. So she probably remembers it being pretty hectic, while I remember it being exciting, laid-back, and full of possibility.
By Jeff Nelson
Email ThisBlogThis!Share to TwitterShare to FacebookShare to Pinterest
Labels: My Journey (so far)
Newer Post Older Post Home