Toy Story and the Church 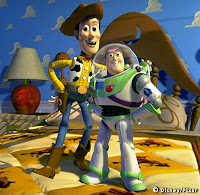 Coffeeson has become a huge Buzz Lightyear fan. I don't really know how this happened. I do remember a Buzz Lightyear cartoon on the Disney Channel not too long ago, which I believe was the first time he ever became aware of that character. Not too long after that, whenever we would pass anything with Buzz's picture on it, he would yell, "Buzz!" After one viewing of a cartoon for maybe 15 minutes.

Since then, we've purchased both Toy Story movies that are out on DVD. We've debated whether he'd sit through the third in a movie theater, but we just don't feel like taking the risk. In the meantime, I am not exaggerating when I tell you that we watch one or both of these movies every. Single. Day. The request/demand can come at any point during the day...we'll be hanging out, and suddenly, "Buzz!" And so it goes.

(I'll go ahead and also share that he does plenty of running around outside, playing with puzzles, reading of books, fun with Duplo blocks, and a host of other non-TV activities. So freaking relax.)

I've noticed something about the kid, Andy, in these movies. I noticed it more in the opening scene of the first movie, where we join him in the midst of playtime. Mr. Potato Head is the bad guy, holding various other toys hostage. Among them is a Little Bo Peep lamp figurine and one of those muscled troll dolls. Woody the cowboy doll comes in to make the save, but only after an exchange between a slinky dog and a plastic t-rex. Oh, and there's a piggy bank, too.

These are the toys that Andy plays with; a hodgepodge of mismatched characters, though obviously centered around his interest in the Wild West. But Woody is the only toy actually related to the Wild West (in the first movie, anyway). Everything changes to a space theme once Buzz comes along, but again he's the only space toy. Andy never gets other space toys; he never receives Emperor Zurg (Buzz's nemesis) as a present. When I was a kid, I loved He-Man toys, but I didn't just have He-Man...I had nearly every Masters of the Universe toy that had been made.

Ultimately, we can praise Andy's imagination and point out that he doesn't need a bunch of themed toys. He does just fine in both movies with this mishmashed collection.

A couple different blogs have made some observations about mishmashed collections of people as they related to the church. first up is Jan:

Instead I had an experience of church that involved an Albanian Libertarian, a Christian construction worker, a retired financial guy from California, and an Ethiopian barrista. This is not the introduction to a joke.

I took the window seat in the only Starbucks I know of that gives 100% of its profits away. One table. Three chairs. Great view of passersby.

Sitting there with my laptop and a Bible, this crew from The Land of Misfit Toys (aka The Church) joined me and shared their stories. And I wrote a sermon. One of them gave me his email so I could send the final product to him. At one point they prayed for me and asked the Spirit to anoint me.

A few years ago I had the idea that the people of our world divide easily into two groups: church people and non-church people. That point of view was understandable; I was a pastor and thoroughly steeped in the culture of American Churchianity.

In those days I attended an unusual funeral. I was there because I knew Laura, the daughter of the deceased. Laura once told me that her mother was not a church person and had a bit of a wild side. Her mother’s closest friends had been her co-workers. They often met after work for drinks and fun. Many of them were present at the funeral, and they were a somewhat rowdy bunch. Most were not dressed in traditional funeral attire. Instead of suits and dresses they wore jeans, motorcycle leathers, and had colorful bandanas on their heads. I had the impression that a number of them were part of a motorcycle club of some kind. They made up roughly half of those gathered at the graveside.

Back when I was more naive than I am now, I made the mistake of seeing my congregation as a monolithic entity. A fresh-faced seminary graduate beginning his first call in rural Ohio may tend to do that. Over 5 1/2 years later, I'm happy to be not so naive; I've been able to see and appreciate the diverse economic, political, and theological makeup of the people to whom I minister. It actually started happening a few months into the gig, so I've been realizing this for a long time.

When I look out from the chancel on a typical Sunday morning, I see the ultra-conservative older gentleman as well as the older woman involved in a local peace and justice group. I see transplanted Baptists, Methodists, and Catholics. I see at least one person who self-identifies as agnostic and someone with pagan sympathies. I see people who beamed when their infant son or daughter was baptized and an extended family that insists that their kids wait until they decide for themselves. I see people who've campaigned for Democratic presidential candidates and people whom you'd probably see at one of the local Tea Parties. We have people who love our Gaither-edited hymnal and others who'd love to use them for bonfire kindling while sticking a drumset up front.

This is our own mishmash of toys, the only theme among us being that we all really like Jesus: what he stands for, what he teaches, the kingdom he reveals.

Some would lament this, I'm sure. Why can't our beliefs be more uniform? Oh, the things we could accomplish if we had more thoughts in common. And if not in action, at least we could present a more united image for others looking for a church home.

Well, the thing is, we're actually doing pretty well for ourselves. This Jesus thing of ours has inspired us to mission, to acts of service. It interests us enough to come together for Bible study or book discussion or Sunday School. It holds us together during worship and fellowship.

At various points in the first two Toy Story movies, some toys become separated from the others. The other toys miss them, if not seek to bring them home. Why? Because their group is not the same without them; because they've bonded despite having virtually nothing in common. As it turns out, their main purpose together is to be Andy's toys. This is their shared life, and it is enough.

The church's shared life is discipleship. For us, it seems to be enough as well.
By Jeff Nelson
Email ThisBlogThis!Share to TwitterShare to FacebookShare to Pinterest
Labels: Church, Fatherhood
Newer Post Older Post Home