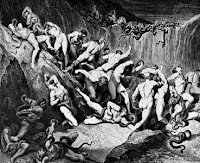 Let me ask you a question.

If I were to say to Coffeewife one day, "If you ever stop loving me, I'll kill you," what kind of person would you think I am?

What if your spouse, your fiance, your boyfriend or girlfriend, even a parent or close friend, said that to you? Do they seem to have your best interests at heart? They've just threatened you: they will end your life if you ever cease to show them the affection that they think they are entitled to receive. They're dead serious, by the way. They're not playing around. They'll do it. So you'd better keep loving them.

So, how would you respond? Would you say, "okay, I will?" Would you agree to their terms, and keep loving them? Would it really be love? Maybe it was love before, but now that the threat has been made, is it still love? You know the consequences, after all. Stop loving them, and it all ends.

It's an abusive relationship, most of us would say. That person has no right to make that threat. He or she should be reported; locked away so that no one else will ever be terrorized by such statements. The threat-maker doesn't love the other person; he or she just wants to control them. Horrible, unreasonable consequences have been presented here. One shouldn't try to manipulate affections like that. You love who you love; you can't force someone to love another. It's tyrannical and it's not how love works.

And if the person receiving the threat agrees, what about them? Is that love? Again, most of us would say that it isn't. Maybe the person would do his or her best to do things perceived to be loving: helping around the house, showing support, and by all means never leaving or choosing to love someone else. But the basis of all this would be fear. One's very life is at stake; you can't mess around with that.

When I was at Michigan Stadium on Saturday, there were people holding up huge banners at at least two of the entrances. I only remember what the one said: "Turn to Jesus; You're bound for hell." Between bites of my overpriced Philly cheesesteak, I wondered whether anyone was actually responding to this message. I wondered whether anyone actually approached the people holding this banner and said, "Well, I sure don't want to go to hell. And for that reason, I would like to turn to Jesus."

That would be the reason someone would turn to Jesus in this instance, after all. That's the message being presented.

Not, "Turn to Jesus, he reveals God's love."

Not, "Turn to Jesus for peace."

Not, "Turn to Jesus for a new life's purpose."

I know a person who, every time we have a spiritual conversation, feels the need to talk about God's judgment and punishment. He mostly does this in reaction to the notion that people of other religions have something to teach us, or may be right in their own way. No, he says, they're destined for hell. They don't believe in Jesus, so that's the future that they face. It's actually quite incredible to me that, no matter what else we could be talking about, he finds a way to steer things back to this one point about God punishing non-Christians for not loving Him.

This person is not the point; the worldview is. He is not alone in thinking this way by any means. Placing special emphasis on God's wrath is widespread, perhaps especially in American Christianity. Over the past several weeks, I've been fascinated to notice this in a new way. How healthy is a theology that can only really play this one note? What kind of a god does it reveal?

If God says to us, "If you ever stop loving me, I'll kill you," what kind of god would you think he is?

I hear the objection: but, Jesus did talk about hell. Indeed he did. There are 11 whole references to hell in the Gospels, most of them repeats due to the same teaching about hell being in Matthew, Mark, and Luke ("If your right hand causes you to stumble, cut it off..."). That's 11 references over four Biblical books. And none of them are in reference to believing in Jesus in order to not be sent there. Instead, they're in reference to faithfulness. They're part of an in-house discussion about faithfulness. Most of the references to hell are part of one teaching about resisting sinful behavior. The other two are directed at the Pharisees for distorting God's message.

Meanwhile, Jesus' main message was this:

Now after John was arrested, Jesus came to Galilee, proclaiming the good news of God, and saying, "The time is fulfilled, and the kingdom of God has come near; repent, and believe in the good news." - Mark 1:14-15

It is also a kingdom that includes transformation. "Repentance" in this kingdom involves changing how we see things, being held accountable, and facing our flaws and sins in honest, bold ways. There is a cost to this relationship, but that cost is rooted in something other than punishment and threats.

You can't be coerced or threatened into loving someone; into making someone your entire reason for living. No matter how hard you try, a forced love is not love. A love based on threats, punishment, and fear is not love. Genuine love is based on mutuality, thankfulness for the other person, and a desire to honor the relationship.

Luke 7:38-50 tells the story of a sinful woman who anointed Jesus' feet. Others grumble about this display of affection, but Jesus observes that what she is doing is in response to the God of forgiveness that she has experienced through him. 1 John 4:19 says, "We love because he first loved us." In other words, God first displays love for humanity and creation (God did call it good, after all), and a realization of that inspires a response from the subject of that love.

Rather than due to threats of destruction, punishment, or torture, loving God and neighbor is meant to come from a genuine response to God's love for us.
By Jeff Nelson
Email ThisBlogThis!Share to TwitterShare to FacebookShare to Pinterest
Labels: Bible, Theology
Newer Post Older Post Home