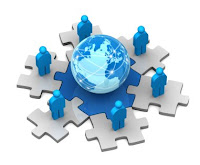 Courtesy of the RevGals:

So here are some questions to ponder for this Friday Five about connecting with:

1. Self: Who was your hero/heroine when you were about ten years old? At that time, it was a handful of cartoons, most notably The Real Ghostbusters (based on movie of same name). Whenever my friends and I played Ghostbusters, I was always Winston due to my darker complexion (please don't read too much into that and go off on my 10-year-old self about whatever). At any rate, Winston was always my favorite Ghostbuster as a result. I had also just started to watch pro wrestling around that time, back when guys like Hulk Hogan, Randy Savage, and the Ultimate Warrior were in their prime, and I really got into those larger-than-life personas.

2. Family: Who are you most like? Who is most like you? Personality-wise, I'm a mix of my parents. My dad is the quiet, more introspective one while my mom is the more outgoing boisterous one. It depends on the situation who comes out more. I suppose that the edge goes to my dad, as I tip toward introversion anyway.

3. Friends: How do you stay in touch? Facebook. Everybody's doing it. Duh. But seriously, I have to give Facebook a lot of credit for how I've been able to stay in touch with people from all phases of my life, including re-connecting with so many whom I didn't know I'd ever see again. My seminary class has a Yahoo group, and I also talk occasionally with people over the phone. But Coffeewife is the big phone person, not me. I've totally been seduced by the internet instead.

4. Neighborhood, community: What are ways you like to be involved? This is one of those that needs an upgrade. I interact with neighbors, but we're still the new kids and don't yet have the connections that others have between them. I've realized lately just how many people beyond the church know me in the town where I pastor, and that's important to me in terms of my role. I'm hoping to become more involved in a local justice ministry, most likely one of the area NAMI chapters, but I'm admittedly dragging my feet.

5. Job/church: Do you see a need that will help in developing connections? My church is just about to start a new mutual review process where each committee is going to evaluate their work, as opposed to a model we've been using where just the pastor is evaluated. I think it'll help the church think more about its ministry together and less in terms of what I do for them.

Bonus: A link or anything else about connecting. I'm using this as an excuse to post this song from the show Phineas and Ferb, from the episode where they hold a concert to raise awareness that the tip of the shoelace is called the aglet. There's a line that says, "We're gonna tie the world together:"