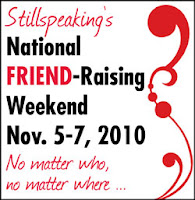 The UCC has really brought out my inner grump lately. I apologize in advance, because I really am glad to be part of this denomination. I guess I just won't be nominated for General Minister and President any time soon.

“We are asking churches to promote Nov. 7 as Stillspeaking Friend-Raising Sunday, a day set aside to be intentional about inviting our family, friends and neighbors to come to church with us,” Carrion says. “Then, we want to hear how the day went, so we can announce a tally for the entire denomination.”

After services on Nov. 7, all UCC churches will be invited to record their visitor tally online at http://www.ucc.org/god-is-still-speaking/friendraising.html. On Tuesday, Nov. 9, a national count of visitors will be announced in the UCC’s weekly Keeping You e-Posted e-newsletter.

The congregations with the most visitors overall and most visitors per capita of membership will receive a new God is Still Speaking banner and a supply of red lapel pins and copies of the inaugural issues of the StillSpeaking Magazine for every member of the congregation. Carrion is also offering to visit the winning churches to say thank you in person.

“We want to underscore the primary goal of the Stillspeaking Ministry, which is to grow the United Church of Christ in visibility, yes, but also numerically,” Carrion says. “This will be a day to let our UCC light shine.”

All Saints Sunday, the first weekend of November, has customarily been a day for promoting the UCC’s God is Still Speaking message, Carrion says.

Okay. First off, the article announces the debut of yet another online commercial that weekend as well. I'm indifferent to that part...I wasn't overly impressed with the last one, but woohoo for people who were and who will promote this one as well.

Second, All Saints Sunday? How many churches will be observing totenfest that day? So all these new people will be invited to worship and immediately walk into a remembrance of departed members. How will that be received, I wonder. Perhaps visitors will be able to see the appreciation of witness that the community is observing. All in all, I can't help but think that it may feel awkward. That practice just doesn't say, "bring a friend" to me. But hey, there's no bad time to invite a friend, right? I guess not. But it does seem like strange timing.

Finally, the heart of the matter. We're keeping a tally! The church that gets the biggest boost in sales...er...attendance wins a visit from the director and a pizza party!* This is a pretty blatant campaign to boost denominational numbers and build up the institution. The UCC has developed a unique place in American Christianity the past few decades, and some will argue that we need to promote that unique place to people otherwise fed up with the church. But from the press release, the main thrust isn't promoting the UCC's voice; it's boosting attendance. "Let's make a tally" is not "let's share the UCC's witness of Christ's love and justice with others."

I'm reminded of a recent evangelical campaign incredibly similar to this called "National Back to Church Sunday:"

“Back to Church Sunday” is aimed at reaching the unchurched and dechurched — people who used to go to church, but don’t any more. The campaign is based on a simple idea. If you ask unchurched people to come with you to church–mostly likely they’ll say yes. Many dechurched people are a simple re-invitation away.

While there are issues here as well, you'll notice that there's at least slightly more concern for people giving the church another chance on its own terms rather than keeping a tally to prop up institutional morale. Although the notion that one's best option to share the love of Christ with others is to invite them to a strange unfamiliar ritual on Sunday morning is still the guiding assumption. And for the UCC, this strange unfamiliar ritual will be made even stranger by the observance of totenfest. This is why I recently started a pub discussion group at my church.

Furthermore, Kingdom Grace makes some good observations about Back to Church Sunday which I think apply to our "friend-raising" venture: "The failure to acknowledge or address the issues behind declining attendance leaves the impression that this campaign is either oblivious or indifferent to the real attitudes of the unchurched and dechurched."

There's nothing wrong with inviting people to worship. People don't even need a special Sunday to do it. But it has to be for the right reasons. Those right reasons don't include keeping a tally or doing it for the sake of one's denomination. There's a reason the person you invited to church stopped attending or doesn't go to begin with. There are reasons why people don't identify as strongly with local or national institutions like the church these days. Taking those reasons seriously will end up being more messy than an online commercial and a notch on a tote board.