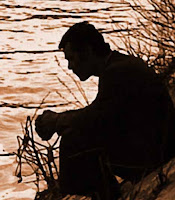 I've been thinking a lot lately about pastoral grief. I don't mean grief in the "wounded healer" sense, where a pastor ministers to someone in grief while aware of his or her own brokenness and emotions. I mean grief in terms of a sense of loss in one's ministry. It's not a pastoral care issue, but a vocational one.

I first started thinking about this when I read Dan Allender's Sabbath earlier this year, and near the back of the book he mentions loss as something that may creep up in moments of silence. When preparing for a six-month sabbatical, he tells of meeting with the academic dean at the school at which he teaches, where he is asked if he'll be prepared for the grief that may surface in moments of silence:

He reminded me of what I knew--most start-up organizations are fraught with untimely departures, chaos, mountains of blame, monumental mistakes, heartache, exhaustion, and loss. He then prayed that our sabbatical would be the beginning of owning the loss and grief associated with the startup of Mars Hill Graduate School.

While it's Allender's intention to dissuade people from dealing with loss during the practice of Sabbath, I was drawn to what he identifies here. I think it's pretty easy to see that this same sort of grief is present with most pastors, whether most of us are aware of it or not.

Much has been written about the typical week a pastor may face. It seems quite cliche for me to give any sort of list here, but I will anyway: visits, sermon and worship preparation, teaching classes, planning programs, dealing with staff, fielding complaints and concerns, organizing volunteers, and so on. The type of grief to which Allender alludes comes from the visit that is emotionally exhausting, the sermon that people clearly didn't care for, the class that spurred a theological argument, the program that didn't live up to expectations, the difficult staff member, the complainer who never seems happy, and the scramble to replace volunteers who have had enough.

Maybe that second list seems cliche as well. Pastors deal with difficult situations and people. It's part of the calling and it can't be avoided. So we're encouraged to find mentors or peer groups or spiritual directors; times and places to process and gripe and emotionally vomit and recharge. But I wonder if many of us ever really deal with that deeper sense of grief. Sure, we get together and swap stories about the time that this guy came in to complain about the hymns or the time when hardly anybody showed up to a program in which we invested a lot of time and energy to organize.

There's more to it even than that. I could relate to you (and in some instances repeat) my own experiences from points in my life where the scales fell from my eyes and I've been able to see the church for what it is: filled with a mixed bag of broken people who are hurting, fearful, devoted, comfortable, bored, loving, hesitant, noncommittal, selfish, seeking answers, or otherwise not the monolithic group of faithful saints you think they're supposed to be. When these sorts of realizations creep in, there is bound to be grief due to loss of innocence, naivete, and idealism.

I could also relate (or repeat) the passing away of markers, culminating moments, points of reference, on which I've relied since beginning full-time ministry. Read this if you want the recap. When that happens, there is bound to be grief due to loss of a spiritual home, physically or otherwise.

And in various points in ministry within a specific context, there may come points where one wonders if the end is near. I've tried so much and failed at so much, one may say. What more can I do? And attached to that are relationships that have formed, roots that have grown, a genuine desire to move forward alongside fellow disciples that seems to be frustrated time and time again. When that builds up, there is bound to be grief, whether due to loss happening in the relationship or anticipatory grief as a change is considered.

How often do we pastors deal with that deeper sense of loss that such moments may build up within us? And if pastors do deal with this sense of loss, whether consciously or unconsciously, what may it mean? I think that, if left to stew below the surface, it affects what sort of impact we may have in our places of ministry. It affects our sense of vocation. It may cause us to question whether we're the right fit for a particular place any more, or whether we're the right fit anywhere. It may affect confidence, energy, self-awareness, and ambition.

After a while, the types of things that Allender mentions can take their toll, and it may not be until a moment of silence--if we ever make time for one--when it will all spill out. Worse yet, it may manifest in unhealthy behaviors or result in burnout.

How exactly should pastors deal with this type of grief, anyway? Perhaps those peer groups could be more than just gripe sessions, but it'd take a lot of trust for such a deeper level of processing. Or maybe it's just a matter of catharsis--beating a drum, visiting a shooting range, hitting a punching bag--but this may just be treating symptoms rather than the cause.

I don't really have an answer to that question at the moment. Right now, I'm still trying to form my thoughts on the grief part. Ministry has its ups and downs, and there are times when one just needs to vent or throw inanimate objects and then carry on with the day. But it may be that something lingers, and something may linger the next time as well, and the next, until one is dealing with a whole pile of lingering things that end up altering one's sense of call or one's effectiveness in ministry. And then what happens?

Will it just finally manifest in that moment of silence? Will it manifest in other destructive ways? Or can it be dealt with honestly, constructively, before one reaches that point?
By Jeff Nelson
Email ThisBlogThis!Share to TwitterShare to FacebookShare to Pinterest
Labels: Ministry, My Journey (so far)
Newer Post Older Post Home