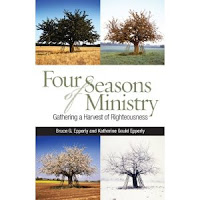 This past week I read Four Seasons of Ministry by Bruce and Katherine Gould Epperly. I read an article by them on the Alban Institute's website, and it inspired me to pick up this book. The Epperlys use the seasonal cycle as a metaphor for a pastor's vocational journey: springtime is discernment of call, summer is one's first pastorate, fall is "midlife," and winter is pre- and post-retirement. The authors then detail some of the issues associated with each season, how one may prepare, some spiritual practices for each, and so on. The book was okay. Before I started reading, I thought it'd be more about the seasonal cycles that may happen more frequently than that in ministry: peaks and valleys, times of great creative energy and times of doubt and questioning about calling and direction, that sort of thing. But that's my own fault for not looking at the book more closely before buying it. My other beef is that the book jumps from the summer of one's first call to the autumn of mid-career. Okay, so what about the 20 or so years in between (assuming the pastor is "first-career")? There were gaps that the Epperlys don't address, mostly because it doesn't fit the metaphor. Or they misapply it. Or both. I guess I'll have to be the one to write the book that I want to read.

I decided that I want to read the Lord of the Rings trilogy, because I never have. I started once, but only got through the first chapter and then lost interest. I have seen the movie adaptations, though, and now feel that it's time to give it another shot. I'm only a few chapters in to The Fellowship of the Ring, which is starting slowly, but it needs to give some backstory first, which I understand. Regardless, I am remembering why I gave up last time. But I'm going to stick with it, because I know it gets better.

I'm still enjoying Boardwalk Empire. There is a distinct difference between it and The Sopranos; I think anyone who's watched more than one episode has picked up on that. Both shows are character-driven, but I still knew that many fans of The Sopranos got the most excited when somebody got killed; otherwise it was a "boring, meaningless" episode. Well, so far there hasn't been a lot of mobster shoot-em-up in Boardwalk Empire, and I could see a lot of people turned off by that. Part of the reasoning is that this show is based on real people and events. We aren't going to tune in some week and see Al Capone get killed. Historical fiction works differently.

Here's a recent Old Spice commercial that I find amusing:

And now here is a parody of that commercial with Grover: