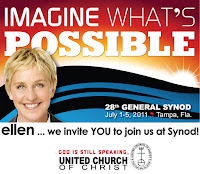 Sure, why not? The national offices of the United Church of Christ have started a campaign to get Ellen DeGeneres to speak at next year's General Synod:

In a unique bid to showcase the carefree, creative component of the UCC, the church has officially invited popular talk-show host Ellen DeGeneres to appear as keynote speaker at General Synod 28 next July in Tampa, Fla.

Writing on behalf of the Synod program and planning committee in a letter dated Oct. 1, the Rev. Geoffrey Black, UCC general minister and president, rolled out the UCC welcome mat for DeGeneres to help Synod-goers live the theme of General Synod 28: "Imagine What’s Possible; God Is Still Speaking."

"Your life, values and humor represent the best of what our church hopes to embody through our witness in the world: joy, love, hope and service," Black wrote DeGeneres. "At a time when religion is often used to divide and exclude people, we seriously believe your participation at our biennial event could send a powerful message to the world.

"Imagine what's possible if we could set aside our need to be right and focused instead on bringing hope and healing to one another, if we could lighten up — and love instead," wrote Black. "We feel you are the one to deliver this message."

I'm pretty indifferent to this attempt to get DeGeneres there. I am amazed, however, at how passionate I've seen people get whether they're for or against this effort. It falls into a pretty predictable divide, really. One side is waving their Bibles around saying that this isn't what our national gathering should promote or be about; it's not preaching the gospel or focused on Christ. Some are cringing at what they see as the latest attempt to get publicity and to be relevant. And then there are those accusing people against the campaign of being intolerant (you know, because Ellen's a lesbian...even though that's not mentioned anywhere as the reason for trying to get her to speak).

I don't really have a dog in this race. I do admit it'd be kinda cool for Ellen to speak at my church's national meeting. But I also can't help but be embarrassed by the goofiness. People recognize Ellen as a playful spirit, and being playful to get her on board, so I'm probably just being a fuddy-duddy.

Keep fear alive, indeed. You've heard about the rallies that Jon Stewart and Stephen Colbert are hosting in Washington this Saturday, right? If not, what's wrong with you? Stewart's Rally to Restore Sanity and Colbert's March to Keep Fear Alive are part satire, part honest plea to stop yelling and being jerks. Some people like Fox News' Monica Crowley aren't amused, to the point where she'll just go ahead and make something up:

Later she tied the Stewart/Colbert rally to Obama’s plot to get young people to vote on Election Day, “Obama has been targeting one group over and over again over the last two months, and that’s the kids. That’s the college students. He’s been all over campuses. He’s had these speeches broadcast nationwide to college campuses. He is targeting the kids, because the kids along with minority groups, African-Americans, Latinos last time were the core constituencies that came out for him last time.”

Host Stuart Varney later tried to correct Crowley that nobody was being bused in at gunpoint, and she took the opportunity to drive the point home one more time by saying, “But we are talking about some unions here, Stuart.” After Varney said again that it was symbolic, Crowley said, “Ok, I’ll concede the point.” This is the typical Fox News model. Crowley spent almost two minutes discrediting the rally and spreading fear about unions, and five seconds at the very end of the segment admitting that it is not true. What messages do think stuck with viewers? People are being forced to attend the Stewart/Colbert rally, and that the rally is designed to help Obama.

Crowley has basically just proven Stewart's and Colbert's point, but my guess is that the average viewer of Fox News won't get it.

I wish I could be able to attend on Saturday. Instead, I'll be at my Association's fall meeting. But I'll be there in spirit.

An artful discussion...I wish I could come up with something more witty than that. Over at Internet Monk, they recently had a conversation about what makes good art, and how to spot it in a Christian manner:

An angel says to a dead artist in The Great Divorce, “When you painted on earth – at least in your earlier days – it was because you caught glimpses of Heaven in the earthly landscape. The success of your painting was that it enabled others to see the glimpses too.”

Measuring art against God’s beauty and truth would eliminate some of what is called art from this and other ages. I don’t mean that everything challenging or painful or negative should be eliminated; the human encounter with God will not be easy, any more than it was easy for Isaiah or for Paul. But perhaps good art is a well-disposed guide that leads us, as Virgil led Dante, closer to God and heaven, even if it leads us through hell on the way. Some art, in contrast, encourages us to continue to roll around in our comfortable mud; some leads us toward our ultimate destruction.

That above is the author's proposed definition of "good" art. Read the whole thing.

The author mentions Green Day as a counterexample to St. Matthew's Passion. Green Day has a song called “Jesus of Suburbia.” It’s 8-9 minutes long, parts of it satire, parts of it blatantly biting, all of it challenging the notion of acceptable religion that approves consumerism and addictions. Many people, because it’s Green Day, because it’s punk music, because it has a few swear words, because they simply find it offensive, will dismiss it and claim that it belongs on that trash heap of forgettable art lost in time. But others will say that it is good art due to its challenging nature (and, I and others would argue, good musicianship). It may or may not convey the “beauty” aspect that many use to judge art good or bad, but it very well may convey truth. If one insists that “good” art represent God’s creation somehow, something like “Jesus of Suburbia” represents the broken part; the part in need of redeeming. Unfortunately, the author doesn't really go into a lot of detail about what constitutes "representing God's creation."
By Jeff Nelson
Email ThisBlogThis!Share to TwitterShare to FacebookShare to Pinterest
Labels: Funny If It Wasn't So Sad, Politics, Small Sips, United Church of Christ
Newer Post Older Post Home