There Is No Magic Bullet 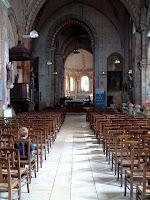 In the middle of my 7th grade year, my family moved to the place that I've called my hometown. For the previous five years or so, we'd lived in the parsonage next to a rural church in the same county; I'd basically come up through elementary school during that time. I'd already experienced two moves (three really, but I have no recollection of the first one) by that point.

Five years is a lifetime for a person at that age. I'd basically planted roots for myself, had made some good friendships, had come to love the freedom of the wide open spaces in which our house was located. It really did seem like I'd lived there forever, and my secret hope was that I could. Unfortunately, it was not to be. Staying in that parsonage wasn't an option due to how things had degenerated between the church and my family. Staying in the area wasn't an option due to financial restrictions and other factors. So we moved to a new city, a new house, a new school system, a new life.

I clearly remember the night my parents broke the news of where we'd be moving. It was an accidental thing; I think they'd meant to approach a moment like that with more care and finesse. Instead, my father was on the phone with somebody discussing the move that had apparently been settled. I overheard this, turned to my mom and asked where we were going. After being told, I ran to my room screaming "No!" I knew full well that this would mean starting over yet again, and I didn't want to. I was tired of starting over. Five years in one place had been forever for me, and I hadn't wanted forever to end.

It did end. We moved, I eventually settled in at our new place. I found friends, I found my first serious girlfriend. By the time I finished high school, I'd lived in this new place for 5 1/2 years.

Strangely enough, this time it didn't seem like forever. I saw an ending coming. By my junior year I was starting to look at colleges. I knew that further change was going to happen and was preparing myself for it. I did so again during my senior year of college. I did so again my last year of seminary. Change is inevitable. It was a painful lesson for my 7th grade self, but that lesson got easier as I got older.

It seems like ever since I began as pastor of this church, I've been trying to learn the opposite lesson. I'll celebrate six years of ministry in this setting next month. It is the longest that I've lived anywhere in my entire life. There's no designated ending for this; no graduation, no culmination, no decision to move looming from somebody else. Coming up very soon is the seventh time I'll move through Advent and Christmas with them; the seventh Lent and Easter; the seventh Vacation Bible School. It will be the beginning of my third trip through the lectionary. I know the rhythm and routine of this place by heart. I've seen possible preaching texts twice. I know what to anticipate and when to start planning each activity. I've learned and lived this rhythm and routine for six years.

When I anticipated my sabbatical earlier this year, I had some very clear goals in mind. My chosen activities and reading material were meant to ask how a vital ministry in one place may still happen after five years. The big question that I took with me was how a pastor may stay in one place that long. It wasn't that I didn't think it's possible or that our relationship was degenerating and I needed a way to hang on. I just didn't know what goes into living in one place that long. I've never had to think about it.

So I decided to think about it. For five weeks I thought about it. I read about it. I prayed about it. I was searching for a magic bullet; that perfect piece of wisdom or practice that would cause six years and seven and eight to feel less like forever. I wanted that elusive secret technique that would provide The Answer.

Leading up to that time, I became increasingly frustrated by the noticeable lack of resources on this topic. Maybe I looked in the wrong places, but each search for some variation on "sustaining creativity in ministry" yielded little to nothing. There are plenty of resources for discerning a call, starting a new call, leaving a call, and retiring, but I found hardly anything for continuing to maintain vitality in one call after X number of years.

Nevertheless, my sabbatical began, and I did my best with what I could find.

I went to Columbus for a two-day workshop on health and excellence in ministry, the content of which had been heavily guarded beforehand. Surely such a secretive program would have what I was looking for. As it turns out, it was as advertised: health and excellence, healthy habits and relationships, proper boundaries, make sure to take your time off and take care of yourself. I came away reminded of some good truths, but no magic bullet.

I picked up a book on longer pastorates. Surely this book had what I was looking for. But, like my ministry workshop, it contained a lot of best practices: healthy habits and relationships, proper boundaries, make sure to take your time off and take care of yourself. I wrote a lament back then, mostly because again, there was no magic bullet.

My sabbatical was good, and it's good to be reminded of those best practices. But there was no new truth bestowed, no secret wisdom or technique. Just the same stuff I'd heard since seminary.

When I came back from sabbatical, I spent the rest of the summer freaking out. In fact, I think I'm still freaking out. I'd come back having heard good words about ministry, but without a magic bullet. That, and I'd officially surpassed the longest I'd ever lived anywhere. For nearly five months now, I've been having a new, unfamiliar experience.

How bad could something like this really be, you ask. There was a day in June when I was in the sanctuary, and I got angry at the altar candles. I had a moment where I was just sick and tired of looking at them. I hated those stupid altar candles that day. Those pew attendance pads...I'm sick of those pew attendance pads. The organist's big binder version of the hymnal...I hate that big binder version of the hymnal. I was getting mad at inanimate objects because they were the same inanimate objects I've seen for forever. Six years is not forever, but that day it was. I hadn't found my magic bullet, and seething at altar candles and pew pads was one of the first manifestations of my freaking out as a result.

I say that I'm still freaking out, but it isn't that intense anymore. It's more like a background freakout now. I've been able to turn my attention to senior high ministry and confirmation and worship, to a pub discussion group that is suddenly exceeding expectations after a slow start, to parishioners struggling with health concerns. I've been able to turn my attention to dates with Coffeewife and time with Coffeeson, to Saturdays yelling at the football players on my TV, to evenings plucking my bass guitar.

I keep right on going with this stuff because, with the possible exception of yelling at the TV and plucking my bass, this is what I'm still called to do. I'm still called to be a husband and father and pastor. I'm called to actually follow those best practices of self-care and boundaries that I was reminded about during sabbatical, because even though there doesn't seem to be a magic bullet, they're still the best ways I know to sustain myself, my relationships, my ministry, my sanity. I'm still called to be pastor right where I am, even though at times I can't help but cry, "How long, O Lord?" And far and away the main reason I cry out like that is because it's incredibly weird for me not to know.
By Jeff Nelson
Email ThisBlogThis!Share to TwitterShare to FacebookShare to Pinterest
Labels: Church, Ministry, My Journey (so far)
Newer Post Older Post Home