Into an Intentional Future 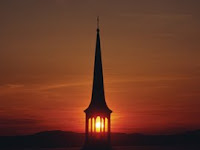 A couple Saturdays ago, I attended my Association's fall meeting. It was a historical, turning-point sort of meeting, shared with the Association to our north, as each voted to enter into more of a shared relationship featuring the restructure of staff. I go to these things more to enjoy time with colleagues and, if applicable, to experience churches around the Association that I've never visited before.

I'd been to this one a couple times. We'd had a meeting just a few years earlier at this same location. Still, I've always found the structure impressive. The sanctuary, just a few years old, is a large open space. It's a modern take on New England Congregational styles: bare white walls, pews set in a crescent shape, clear windows to let in plenty of natural light. The chancel is fairly large, allowing for plenty of space for movement, with a long communion table set against the back wall. To the right of the chancel is a large choir loft; to the left are 2-3 tiers of tables for a bell choir. A balcony wraps around the back of the sanctuary. It's a magnificent room that seats, by my estimate, between 300 and 400 people comfortably. This is to say nothing of the extensive educational wing or the multi-purpose fellowship building across the parking lot.

When the senior pastor stood to offer his greetings to the gathering, he mentioned that a wedding would be held there that afternoon. All I could think was, "Well, of course there will be." My quaint, traditional country church attracts quite a few engaged couples; I had to imagine that this place with its immense seating capacity and state-of-the-art facilities may attract even more.

It was some point in the midst of this that I started to think about the coordination that it must take to be pastor of a church this size. Its large membership would, I think, entail a larger number of weddings and funerals a year. Practices for musical groups, educational activities, fellowship, outside groups that use the building, and whatever else surely take a great deal of communication, making sure that the schedule is consulted and updated, enlistment of volunteers, and so on.

This is the life of a "programmatic congregation," as Diana Butler Bass calls it in The Practicing Congregation. It is a model of church that began around 1950 and is still very much viable in today's culture. It is the type of congregation that has a wide variety of programs and activities for people of all ages and many interests. My assumption is that programmatic congregations tend to be larger, but I'm up for having that assumption disputed.

I more or less grew up in a larger, programmatic congregation. Even as I've spent time in churches of other sizes, this was the model of church with which I was most familiar. I realized how limited this familiarity was my first couple years at the church where I am pastor. I took great pains to try to get this smaller church littered with large extended families that is more used to revolving around the pastor to function as a church revolving around programs instead. I tried a young adult program and it quickly fizzled. Several other fellowship programs such as our women's guild and quilting group have retired since I began. It took me 4-5 years of trial and error to come up with anything resembling a senior high program.

It took me a few years to finally realize that 1) we aren't a programmatic church, and 2) the programmatic model just doesn't work for us the way it does in other places. Sure, we have programs, but not in the sense that each age group or gender is neatly compartmentalized assuming that they all like to be together and have the same interests. After trying so hard for so long, it dawned on me that that model just isn't appropriate here. And you have no idea how much of a relief that realization was.

In the meantime, here are a couple things that have been working:

~A senior high program that features their being paired with adult sponsors during confirmation, whom they continue to interact with in various service, fellowship, and educational activities until they graduate. We just had a firepit in September that not only brought them together, but saw recent graduates and parents attend as well.

~A pub discussion group that has seen people attend ranging in age from 25 to 80 (yes, 80). Eight people attended last month, but we could have had upwards of 15.

~Mission and service activities that have brought multiple generations together.

Do you detect a pattern?

As I have finally let go of the notion that we should be a programmatic congregation, I've tried to get a handle on what exactly we are instead. We're doing a lot intergenerational things, some of which could be considered "emerging" or "missional," an increased amount of activities that emphasize building community & caring for one another, and all of it without too much polish or finesse. Some of that is my own discovered style, but I'll save that for another post.

When I began reading Bass' book, I finally found a name for what we are. Bass describes the latest model of church that has risen in recent decades as placing an emphasis on practice and intentional community, rather than programs. That's what she calls them, too: "practicing" or "intentional" congregations. The funny part is that I'm not sure how intentional this shift has been.

Since beginning to read this book, I've been thankful to have finally found a name for what we are becoming. I've also been thankful that we are becoming it. I'll shortly begin my seventh year of ministry here, praying that we continue into an intentional future.
By Jeff Nelson
Email ThisBlogThis!Share to TwitterShare to FacebookShare to Pinterest
Labels: Church
Newer Post Older Post Home