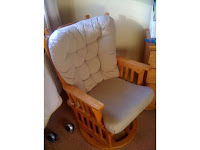 When we first brought Coffeeson home from the hospital, he didn't want to be put down. Whenever we'd set him in his crib or in the side sleeper we kept in our bedroom, he'd start crying, even if he was sound asleep when we'd done so. For at least the first couple nights, we took turns holding him all night long. I watched a lot of early morning Comedy Central; I have no idea what Coffeewife did because I'd pass into a mini-coma when it was her turn.

After quickly deciding that this wasn't going to work for very long, I came up with the idea to start setting him in his carseat at night. He seemed to still like the position he was in while in the womb: somewhat curled up and surrounded by something secure and warm. Being flat on his back was something new and uncomfortable for him, so this was why he preferred to be nuzzled against one of us. So, in an effort to get him to sleep and to preserve our sanity, we placed him in his carseat, blanket underneath and around him, and all of us carried on as a new family.

Eventually, we weaned him off the carseat. While it produced a few difficult nights, he made the transition relatively well. Finally, both the crib and the carseat could be used for their intended purposes.

Coffeeson has never completely let go of his preference for one of us holding him while he sleeps. He's had these brief phases where I'll rock him to sleep, but as soon as his body hits the crib's mattress, he wakes up crying. He only does this for nap time nowadays; it's been a long time since he cried after we put him down at night. That, and he only seems to do it for me, Coffeewife, and CoffeeGrandma. He stays asleep for the nanny, and he'll obediently lie on his cot for nap time at daycare. If one of the three of us is rocking him, he wants us to keep rocking him. I have to conclude that he likes that time with us.

For the longest time, I found this incredibly irritating. In my mind, I was stuck there. I had a list of stuff that I wanted to do while he slept, and here I'd be with nothing besides my own thoughts to keep me company. I knew why he didn't want to sleep out of my arms, but I still didn't like it.

I can't help but think that he's developed some of my sleep habits. I am not a sound sleeper. If something wakes me up at night, it can be quite a while before I can shut my brain back off so that I can get more rest. In recent years, this has been harder: I stay up thinking about something church-related, or Coffeewife's early morning alarm starts going off (and then she hits the snooze and it goes off again, and this little game plays out for the next hour...I am not exaggerating). Just the other night, I knew that I had to go to bed, but then I tossed and turned for quite a while before calming down enough to fall asleep.

This sort of problem has plagued me since college. I had my first bout of insomnia my sophomore year. I was a very busy guy in college, and especially at that point: I was in a play, I was involved with my fraternity, I had this, that, and the other campus ministry thing going on, I had this cool new girlfriend I enjoyed spending time with, and I was getting my grades up after a somewhat miserable middle-of-semester assessment in a few classes. I was enjoying all of it, and none of it seemed to be weighing me down, at least consciously. I was just starting to budget my time better in order to get all of it done. So why couldn't I fall asleep?

Looking back on those sleep-deprived weeks, I think the problem then is the same problem that I have now: I don't know how to wind down. Between church, family, basic household maintenance, and a few hobbies, I structure my day to at least keep up with it, and then when it's time to recharge, it can take some effort to wind down (and then stay down) in order to get what I need to keep going.

One afternoon while getting ready to rock Coffeeson, I had the idea to take a book in with me. I stuffed it into the little side pocket of the rocking chair, and after he fell asleep I started reading. I'd long resigned myself to the fact that he didn't want me to put him down, so I started to adjust. I figured I'd at least try to enjoy myself while he got what he needed.

It didn't take me too long to find enjoyment in this exercise. Turning the pages of a book is not the easiest thing to do with a sleeping toddler on your lap, but that was made infinitely easier after I received a Kindle for Father's Day this past year. You want to know how it seems like I read a new book every week? It's because I have 7-9 hours every weekend where basically all I do is rock Coffeeson while continually clicking "Next Page" on what I now think is one of the greatest innovations in reading ever.

Hey, you know what else I sometimes do when rocking Coffeeson? I take a nap, too. Yeah, I do. If I find myself nodding off, I'll set my Kindle in that handy side pouch, place a pillow behind my head, and allow myself to doze off. The other day, I slept for two hours. You have to understand that I otherwise suck at napping just as much as I sometimes suck at sleeping at night. But rocking Coffeeson slows me down enough that I realize how tired I really am, so we end up napping together.

I now get excited for Coffeeson's nap time on the weekends because I know what I get to do: I get to sit in a comfy chair with my son and just read or sleep. I've learned a lot as a father over the past 2 1/2 years, but one of the best things that Coffeeson has taught me is how to wind down.
By Jeff Nelson
Email ThisBlogThis!Share to TwitterShare to FacebookShare to Pinterest
Labels: Fatherhood
Newer Post Older Post Home