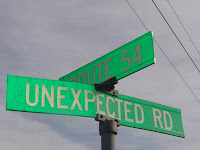 Name five things that were unexpected in your life that you are now grateful for.

1. Moving to my "hometown." In 7th grade, we moved...again. I hated it, it took me years to get over it, and I still hate the sight of the building where I went to junior high. Nevertheless, I've considered the past couple years just how much positivity came out of that move. Once I got to high school, I came out of my shell in many ways that helped shape my identity for the rest of my life so far: first love, an increased interest in learning an instrument, a cultivation of theatre talents, and discernment in faith and vocation. That all started happening in high school, and set me on the path that I'm still on today in many ways. And it all started with a move that I hated at the time.

2. Getting the third cat. We didn't intend to get a third cat. I was happy with just two. But for a while, Coffeewife had a thing about visiting the Humane Society every once in a while just to visit the animals. I think it made her feel better at times when she was feeling down. So we made a trip there one day and began playing with a black-and-grey striped cat who was so incredibly snuggly and playful that I eventually caved in to the sight of two sets of big round pleading eyes. Snickers is the most laid-back, loveable cat you'll ever meet, and now I'm glad he's a part of our family.

3. City life. After a lifetime of living in small towns and rural areas, I got my first real taste of the big city when I moved to St. Louis for seminary. For quite a while, I wasn't sure about this change; I was a square peg in a round hole for quite a while. After really settling in, however, I came to love the rich cultural diversity that I was experiencing, to the point where I think I'm still more of a city person even as I'm back in a small town area. I continue to appreciate the larger cultural centers around where I live, and take the opportunity to visit larger cities whenever I can.

4. "I know someone who likes you." The story of how Coffeewife and I started dating is somewhat convoluted and has a junior high sort of ending. The short version is that during my sophomore year of college, my best friend and I both liked her, he ended up dating her first, I basically gave up and started turning my attention to others, and after we all came back from Christmas break, one of her close friends approached me in the cafeteria and uttered the line referenced at the beginning of this paragraph. The rest is pretty much history: January 15th is the 12th anniversary of our first date, we'll have been married 9 years next June, and we have Coffeeson. But after expecting that the previous semester's episode had pretty much sealed off any possibility of us being together, here came her friend, and on it went.

5. He-Man makes a comeback. I wanted to throw on a silly one, so here it is. For months and months, my He-Man toys had been sitting in our garage. One day, we got out a couple for Coffeeson to play with, and now they're some of his favorites. It's been an unexpected joy to see him play with the same toys that I loved when I was a kid. So for that, I'm thankful.
By Jeff Nelson
Email ThisBlogThis!Share to TwitterShare to FacebookShare to Pinterest
Labels: Memes
Newer Post Older Post Home