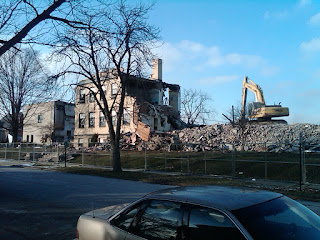 They've been tearing down the building where I attended junior high. My brother sent me a text on a windy Friday morning, and I made it a point to drive to my hometown within a few hours to see how much they had done. I recall actually having a tightness in my stomach on the way there...the car couldn't move fast enough, as if they'd already be finished and the brick and mortar cleared away before I could see it.

At that point, they hadn't done a whole lot. The gym, cafeteria, and lobby were all gone. In fact, a partial wall of the gym was still standing, complete with "Welcome to [Hometown]" stenciled on the brick. I'd parked and walked around the area, getting as close as I possibly could in order to snap a couple pictures.

The picture above is their progress as of last Thursday. I have to say that it's a much more satisfying image for me than the ones I'd taken almost a week earlier. I imagine that the site is just a pile of bricks at this point, but even then, seeing it in the midst of being torn down brings me more joy than the completed project.

I've been thinking lately about whether places can be redeemed for people. Some seem beyond redeeming, such as the sites of the death camps in Germany. People describe having powerful experiences there due to the horrible aura that remains. When I visited Ground Zero a few years ago, I uttered maybe five words the entire time. Of course, the big mission since 9/11 has been to redeem that site; to rebuild and to carry on. Whether one believes that a more overt shrine should be built there instead is up for debate. Nevertheless, while the memory of that day and the lives lost will always be associated with that spot, people are seeking to redeem it; to make it more than that memory.

I do not dare compare junior high with the Holocaust or 9/11, because that would be absolutely ridiculous. But I use them as big public examples of whether places can be redeemed. There are many much smaller-scale examples of this.

There's an episode of Boardwalk Empire where Nucky has his childhood home renovated in order to be given to a young family. While doing this, some memories from that home come rushing back to him, mainly of physical and emotional abuse by his father. These memories eventually overwhelm him to the point where he burns the house to the ground. For him, that place was beyond redeeming. Can places that each of us associate with such experiences ever be redeemed?

The argument could be made that lots of people hated junior high. Why take such pleasure in watching yours ripped down? For me, that building represented more than just The Junior High Experience. And I'm sure that I could look back and produce positive memories from that year and a half. But it wasn't just junior high: that building represented a church that had run my family off, being the new kid at one of the absolute worst ages socially to be such, leaving treasured friendships and a treasured home behind, and incredibly lean and uncertain times for my family.

Even as I write this, I'm realizing that the church building where it all started or the duplex that we moved into, for instance, don't represent any of that...I'd come to associate all of it with the junior high instead. The reminders in that building were most real and daily, and all these years later I've passed that building far more frequently than most others from that period.

Sometimes, places can indeed be redeemed for people. It may even be argued that no place is ever totally beyond redeeming. There was a story not too long ago about a Holocaust survivor who danced at Auschwitz. For him, that place was redeemed in a sense by that action. Sometimes, people can return to places of trauma, abuse, unfinished chapters and other dark experiences, and redeem those places for themselves. Most times, I think, people can't do that, or don't want to.

Most other survivors could not and cannot ever come to a point where they can dance at Auschwitz. Much the same not all places can be redeemed or are worth redeeming for many. Maybe a person can come to a point where they've made peace with a past experience, but a place still holds the memory of that experience. Does a place necessarily need to be redeemed as part of that healing, or is the inner reconciliation enough? In some instances, could it be more healing, more cathartic, perhaps, to watch such a place destroyed instead, like Nucky's childhood home?

Could the junior high building have ever been redeemed for me? If somebody had made a bid for it and turned it into a bed and breakfast or something, could I have one day stepped inside and said, "Yeah, this place isn't so bad?" Could I have ever let go of the past to the point where that place could just be a place, without causing the visceral reaction for me that it did? Could something have been changed, where I may have had the opportunity to create new positive memories there that at least could have begun balancing out the negative ones?

Maybe. But now it's too late. And I could really give a damn.
By Jeff Nelson
Email ThisBlogThis!Share to TwitterShare to FacebookShare to Pinterest
Labels: My Journey (so far)
Newer Post Older Post Home