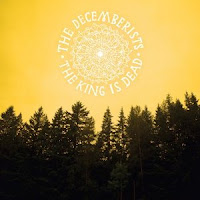 I finished The Hunger Games this past week. I really thought that I wouldn't like it given the themes, but by the end I couldn't put it down. I found myself rooting for Katniss and being genuinely in suspense during the Games themselves. Collins' writing made me care, pulled me into the bleak situation into which the 24 tributes are thrown. The violence is not graphic, but it is presented in unsentimental fashion, the way it should be. Characters do not die honorable or romantic deaths; you very much get the sense that they die as expendable pieces of a game that the government is playing. Katniss is not a sentimental character, either: while very resourceful as a hunter and competitor, she's incredibly clueless when it comes to relating to others. She plays the game, plays life, to survive, just like she's used to doing. And now I have to read the other two in the series.

We watched Despicable Me last night, in which Steve Carell voices Gru, an evil mastermind seeking to become the world's #1 supervillain. He soon finds competition in Vector (Jason Segal), who steals one of the Egyptian pyramids and then begins competing for Gru's next effort: stealing the moon. In the process, Gru takes in three orphan girls: at first it is to use them as part of his plot to foil Vector, but he eventually begins to shift his priorities to looking after their well-being. The voice cast also includes Wil Arnett, Russell Brand, and Julie Andrews. The film had some very funny moments, particularly from Gru's little yellow minions and the youngest girl (at certain points she reminded me of Coffeeson, which only made me laugh harder at her). I know Dreamworks animation doesn't get nearly as much critical love as Pixar, but they really have put out some fun movies the past few years. [This movie is actually done by Universal. But my statement about Dreamworks is still true, just not in this specific instance. - ed.]

I finally received my copy of The Decemberists' The King is Dead this week, and it's awesome. I'm biased, but I don't care. For me, it's a welcome step away from what they strove for on their two previous albums: this is a much more straightforward album with simple arrangements that mostly gives a country/folk feel, with some help from Gillian Welch and REM's Peter Buck. Aside from the single, "Down By the Water," the pensive "Rise to Me" and the aptly named "January Hymn" have become favorites for me.

Along with The Decemberists came SMV's Thunder. SMV is Stanley Clarke, Marcus Miller, and Victor Wooten in all their bass-y awesomeness. The way the three of them weave in and out of one another's playing, each taking turns at the forefront of the song and in more supportive roles, is brilliant. I do have a gripe with the use of synthesizers that makes it sound like they never made it out of the early '90s (as a side note, the way a couple of them dress only reiterates this notion). Aside from that, though, this is a great CD featuring three masters of the bass guitar doing what they do better than most.

Here is the video for A-Ha's "Take on Me," except the lyrics now narrate exactly what happens in the video: