Responses to a 2006 Religion Survey 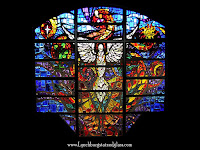 Greg at The Parish picked up on a post from Scott, who is answering questions from a recent book by Robert Putnam. Since they both offered/are offering responses to those questions, I thought I'd take a stab at them, too.

1) Are you absolutely sure, somewhat sure, not quite sure, not at all sure, or are you sure you do not believe in God? I echo both Greg and Scott by first asking, "What do you mean by God?" In terms of an omni-everything Sky Grandfather, no, I don't. Terms such as Father are helpful as metaphors (and Jesus certainly found it helpful as well), but not in a literal sense. I believe in a process God ever working out God's unchanging love in a changing world as revealed through Christ, ever-present and influencing rather than intervening, and existing in a sense other than as a Supercreature who pops in and out of the world as he sees fit. That's how I begin to answer that question. I imagine that a lot of these are going to need such clarification.

2) . . . in life after death? I believe that life does continue after death, yes. In what sense, I don't know.

3) . . . in heaven? In the sense that an age will come where the reign of God is fully realized, yes. In the sense of pearly gates, golden streets, and Michael W. Smith constantly played through loudspeakers, not so much.

4) . . . in hell? In the sense of alienation from God that somehow results from our own decision, yes. In the sense that all non-Christians burn forever, no.

5) Do you believe the world is soon coming to an end, or not? The question probably means something along the lines of earth ceasing to exist through some grand catastrophe. In that sense, considering that our planet is increasingly one huge humanitarian crisis, I wouldn't be surprised. However, in the sense that this age will soon end to be replaced by a new age...I dunno. But the latter is how I think about the end of the world in a theological sense.

6) Have you ever personally experienced the presence of God, or not? Yes.

7) How often do you personally feel God's love in your life? I like Scott's answer: "Whenever I attend to it."

8) How often do you personally feel God's judgment in your life? This is a strange question, if only because I don't think Christians talk nearly as much about "feeling God's judgment" in their lives. But Scott's answer again is a good one: "whenever I attend to it." I'll add "whenever somebody calls me out on something and I have no response other than to agree." That is to be differentiated from misperceptions or when somebody is taking out their pathology on me.

9) How important is your religion to your sense of who you are? My faith is very important to who I am. My religion is important in the sense that it provides tools and practices to nurture my faith, and thus my sense of self.

10) How important is religion in your daily life? In the sense that it provides tools and practices that I use nearly daily, very.

11) How important is religion to you in making decisions regarding your career, family, or health? I use these tools and practices nearly daily to sort out thoughts and decisions that arise in my life.

12) How important is religion to you in making decisions on political issues? My faith in and striving to follow Jesus weighs very heavily in how I think about politics. The alternative ethic that he preached is something that I wrestle with as an American citizen, as I believe Christians should do.

13) Would you call yourself a strong believer in your religion or not a very strong believer? Religion is a human construct attempting to make sense of things larger than itself. That's why I keep repeating the "tools and practices" thing. I strive to believe in the God to which my religion points, and recognize that I, being the little speck that I am, can only know so much through religion or otherwise. Believing "in religion" itself is a recipe for dogmatism, fundamentalism, and oppression.

15) How often do you read holy scriptures? Almost daily.

16) How often do you say grace or give blessings to God before meals? This used to be a regular thing for me, but I don't currently make a regular point of it.

17) How often do you pray outside of religious services? Almost daily.

18) We will all be called before God to answer for our sins. (agree/disagree) I think that God is constantly calling us to account for sin, not just in some future moment.

23) Which comes closest to your views: The path to salvation comes through our actions or deeds OR the path to salvation lies in our beliefs or faith? Salvation from what? I'm sure that the questioner and many responders assume hell. There are a myriad of other things that humans need to be saved from, not all at once: oppression, greed, ignorance, poverty, mental illness, aimlessness and sin, etc. Our own faith or actions addresses some of these, the faith and actions of others addresses some as well. Apart from that, faith and actions are linked, as per what most of the Bible says.