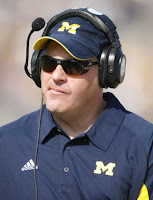 This has nothing to do with what's been happening with the Michigan football program in recent days, because this blog extensively references coffee and I'd need to be drinking something harder in order to write about that.

Okay, this has a little to do with Michigan, because a lot of what I've read lately (and I've read A LOT) is that Rodriguez just wasn't a good fit as head coach. He rubbed the alumni the wrong way (some of which was their own damn problem), he showed a lack of appreciation for the culture at times, he blew things up and wanted to do things solely his way, he didn't take into proper account that there are three phases of the game and team to account for, and all three are crucial to winning in the Big Tenelve, and within Schembechler Hall he was highly critical of what Lloyd Carr had left him, and since there were still a bunch of people who liked and worked with Carr hanging around, they weren't very appreciative.

Rodriguez wasn't the right fit for all of these reasons and more. In many ways, his style didn't mix well at all with the athletic department, the university, or the conference. So now, he's gone less than a month before signing day, and that genius of an athletic director now has to scramble to find a replacement in order to salvage what's left of the recruiting class and the 2011 season. Why he didn't do this before the (godawful) bowl game is beyond me, but hey, it's part of his process and whatever.

A couple years ago, my in-laws' church--a large Presbyterian church in suburban Cincinnati--was looking for an associate pastor. They'd just completed work on a magnificent new sanctuary, have thriving programs of all kinds, and surely have resources to do some tremendous things in the community. Somewhat inevitably, someone from the family mentioned it to me. If nothing else, this is part of the dream to get us to live closer to that end of the state.

I did take some time to think it over, if not just for fun. The prospect was intriguing enough: what I'd have access to in that church would greatly outweigh what I have where I am. However, I ventured a guess at that time that I wouldn't have fit in with the culture very well. It was very limited experience that told me this, but I don't think I would have been a good fit theologically or stylistically. I would have wanted to question or redirect too many things. Some of the things that I've said where I am would probably land with a dull thud in that church. I think about some of the silly things I say during sermons, or starting a pub discussion group, or encouraging more "contemporary" worship (something I know garners resistance or apathy there), and I just don't see it working very well. Granted, I'm making plenty of assumptions and I have no doubt that the people there are good, faithful types. But they needed (and eventually found) somebody else.

It's the assumed dream for a lot of pastors to "work their way up the ladder:" graduate seminary, tough it out for a few years in a rural or small town setting, land an opportunity at a bigger church, eventually become senior pastor in a Big Steeple situation, maybe eventually teach seminary or get a judicatory position. There are a lot of reasons to question this thinking, among them being what the nature of ministry actually is. But for the purposes of this post, there's something else to think about: what if trying to work up the ladder would be the most unfaithful thing that one could do as a pastor? What if one is simply better suited for a setting that is considered "lesser" in the eyes of whomever came up with the idea that we should all be striving for Big Steeples or professorships?

The last season of the TV show Angel featured the group attempting to run the Los Angeles branch of Wolfram and Hart, the demonic law firm that they'd battled through the previous four seasons. Up to that point, they'd operated out of a small office space and then an abandoned hotel, taking freelance jobs. In those settings, they're allowed to be a little unorthodox and can call on individual gifts as are appropriate. Once they take over the law firm, they marvel at the amount of resources but also find themselves handcuffed by newfound responsibilities and the balancing act that they need to maintain. As the season wears on, they wonder if the trade-off was worth it.

I'm sure that Rodriguez had wondered many times whether the trade-off was worth leaving West Virginia for the bigger and better resources at Michigan. He ended up wanting to keep many of the things that worked at his alma mater but didn't translate well in his new position. He needed to adapt and to let certain things go, but he couldn't. That was a big part of his undoing.

A lot of this post seems to be me dogging bigger churches, which I don't mean to do. If I'm ever called to such a setting (and it has to be a call), then I'll know that there will be things I've done where I am that won't work there. And to be fair, I've already learned that things that work in bigger churches do not translate well to smaller ones, such as trying to implement a program model where a pastoral model is the norm. Someone who is used to a bigger setting but who craves a smaller one will have to adapt just as much as one going from smaller to bigger. Is one truly the right fit for a smaller church? It seems like a strange question, but no less serious: perhaps the pastor of a bigger church dreams of the romanticized setting of a quaint, clapboard country church, but realizes once he or she gets there that there's a whole different culture to which he or she must adapt (right, Barbara Brown Taylor?).

All of this is to say, I suppose, that adaptation and cultural appreciation of place is critical to pastor any church. There's a certain "well, duh" to that, but there really does have to be an intention on the pastor's part to do that. Sure, pastors are meant to stretch people and afflict the comfortable and sometimes be prophetic and strive for congregational vitality, but it takes some regard for context to do that. It also takes some serious wrestling with the question, "Am I the right fit?" It may be that one isn't; it may just be us wanting the big church with more resources or the small church with the cute lil' quilting group, and have little to nothing at all to do with being called there.
By Jeff Nelson
Email ThisBlogThis!Share to TwitterShare to FacebookShare to Pinterest
Labels: Church, Ministry, Sports
Newer Post Older Post Home