Small Sips Backpedals and Insists that It's a Surveyor's Symbol 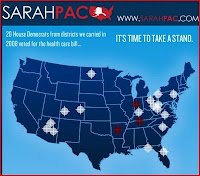 Can we stop the crazy now? Political blogger Robert Zimmer shares some thoughts on the shootings that occurred this past Saturday in Arizona:

When the dust settled at the Safeway on Saturday, six people had been killed, and twenty wounded. It was a savagely effective display of the "Second Amendment remedies" infamously suggested by Nevada Tea Party favorite Sharron Angle, as a cure for members of Congress who dared ignore the demands of her flock of right-wing crazies. Indeed, Mama Grizzly Sarah Palin even included Rep. Giffords in her list of "targeted" members of Congress, when she urged her followers "Don't retreat -- reload!" – which will likely go down as one of the most unfortunate tweets in the short history of the new medium. A political map (now removed from Palin's website) that accompanied Palin's inflammatory tweet even helpfully included crosshairs over each offending congressional district, in case anyone missed the gun allusions. In a pathetic, desperate back-pedal on Jan. 9, Palin aide Rebecca Mansour defended the cross-hairs over Rep. Gifford's district as merely a "surveyor's symbol." I'm sure this semantic difference is comforting to the families of the dead.

But Ms. Mansour, ironically, is partially correct. Ultimately, surveyors of American history will indeed remember this horrific assassination as a symbol -- of sanity restored. January 8, 2011 will be remembered as the day a nation stuck in a nightmare of hateful, violent, right-wing rhetoric was shocked awake, by an ugly reminder about the power of language. Words not only have the power to inspire a people to heed the better angels of our nature, but they also have the power to transform ideological frustrations into murder. Take one part troubled youth, add a dash of mental illness, shake vigorously, and throw in a match of irresponsible Tea Party calls-to-action, and boom – you've killed off three generations of public service in a day.

Now among the dead are a Republican, a Democrat, and a child likely too young to be imprisoned by the shackles of ideology. Many of the other casualties are abstract, but equally human and important – the spirit of public service; the notion that there should be a robust, even loud debate among us, but that we do not solve our differences through violence. And who the hell is going to be the next person brave enough to shake hands with constituents at a grocery store?

There has been a widespread call for an analysis of how the current tone of rhetoric used by politicians and pundits may have created an atmosphere for this sort of thing to happen, as well as a dialing down of that same rhetoric regardless. Some are already taking these suggestions as "blaming the right" for something that an individual did on his own, but I think the argument really applies to everybody. It's just that one "side" seems to be providing more examples.

I'm wondering whether the nation has really been "shocked awake" by this. Call me cynical, but it's way too early to see whether this shooting--the very real logical conclusion to hypothetical "Second Amendment remedies" talk and even of metaphorical crosshairs on a website--will cause much of anything to change. The Crazy Train has been rolling for quite some time now; I'd be amazed if it could be stopped or even slowed at this point.

Definitely. Not. Great. This is a phrase that was conjured by guys in my fraternity for those moments during pledging activities when we were visited by college officials making sure we weren't being too hard on the pledges. So if somebody did something worth being yelled at about, we'd use this phrase instead of what we really wanted to say.

So instead of what I really want to say, I'll just use this phrase in light of the press release issued from the Michigan Athletic Department yesterday:

ANN ARBOR – University of Michigan Athletic Director Dave Brandon announced today (Tuesday, Jan. 11) the hiring of Brady Hoke as the 19th coach in the 131-year history of Michigan football. Hoke arrives in Ann Arbor after spending the past eight seasons as a head coach at Ball State (2003-08) and San Diego State (2009-10).

“We are pleased to announce the hiring of Brady,” said Brandon. “He is a terrific coach and will be a great ambassador and leader for our football program. We look forward to having him build a championship program on the field and in the classroom.”

Hoke is 47-50 as a head coach. The program was turned down by two head coaches who are alums and former players (and have much better prospects). Brandon waited to begin his search until January, and as a result half the recruiting class has already changed their intended choice. Michigan has settled once again, especially since being a "Michigan Man" is apparently a requirement. Yost was from West Virginia (hires from that state never work), Crisler was from Illinois, Bo was from Ohio, but no, we need a "Michigan Man," and since Plans A and B didn't work out, they've gone with Plan C once again.

I have nothing else to say right now. At least nothing that I should print on a pastor's blog.

Take us home, Mikey. Chaplain Mike over at Internet Monk shares a quote from Richard Halverson that I thought worth reposting here:

“Think of it this way. The program of our church is everything all the members are doing between Sundays. The church keeps house, goes to school, teaches, practices law, medicine and dentistry, runs business and industry, farms, works on construction jobs, researches in many fields, sits on school boards, city councils, county councils, state legislatures and congress. Between Sundays the church is involved in everything productive and constructive that is happening in our community. And it does so as a witness to Christ, to the glory of God, in His love and in the power of the Holy Spirit, sensitive to its accountability to Christ.