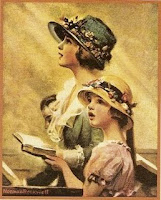 Sometime last year, I picked up on the fact that a couple church members had found my blog. I have never really advertised it to them, for a reason that will sound very selfish to some: in the fishbowl life of a pastor, this blog was pretty much the only thing that was mine. It's not that I didn't want to share it or was afraid of their reaction. I just...didn't. Nevertheless, the cat is out of the bag, and now I have a couple church members--the few interested enough--who read.

Having quickly achieved peace with that, I decided to actively advertise my blog for the first time in a place where I knew church members would see it and possibly click: that ever-expansive blessing and burden out of Mark Zuckerberg's Harvard brain, Facebook. And the entry that I advertised was the one right before this: A Post-Easter Conversation. I won't lie: I was especially proud of that one. I loved how it turned out, so it seemed like a good one to link. And so, the hits came. I got two comments on the link, one thanking me and one wondering if it had been her high schooler whom I had referenced playing tic-tac-toe.

And then the red flag went up. Suddenly, the full ramifications of publicizing this entry became clear. People might be wondering if I'm writing about them. He used the word "damn." Twice. Some may read it and think, "I never knew he could get so frustrated with us." And thus a can of worms could be opened that I hadn't intended. The piece, taken as a whole, is about a pastor learning something about ministry. I am not the hero. I say things out of frustration in the story which, yeah, it happens. But I didn't write it as a direct rant about my church. Still, there was potential for the forest to be missed for the trees. And so I started to rethink my linking the blog in that other online space.

I've read many a pastor's blog that is clearly meant to be his or her "work blog." They're designated as The Official Church Blog of Pastor So-and-So, meant for pastors to share reflections with church members and any guests who wander onto the church website and see the link. These frequently consist of reflections on the weekly passages suggested by the lectionary, or other anecdotes shared followed by ruminations on some aspect of faith. But there's a tone to these blogs, most definitely influenced by the primary audience. There's a broadness, a politeness, a tameness to it that perhaps works, but it's not what this blog started as, and I don't really feel like changing even now that I know that a few church people read it. There's a reason why the people who found it last year have kept reading; there's a reason why somebody thanked me for Monday's post. And those are the people that I mostly want to read this anyway.

For everyone else, there may come complaints about the edginess that frequently displays itself here. This is not a typical church-sponsored polite pastor's blog. I don't want it to be that. If it were that, I would become bored with writing here very quickly. My newsletter articles are pretty tame, this is not. That's pretty much how it is.

Of course, the objection will come that I'm an ambassador for my church, and won't I be worried about perception and whatever? I have a couple answers for that, the first being to point out the little boilerplate paragraph over to the left clearly stating that this is my own personal hobby, not to be considered part of my pastoral work. This means a couple things:1) my audience is not present or future church members, it's whomever wanders by, and 2) I post when I want, not on some work-determined schedule.

There are at least three other reasons why I don't want to write about polite things:

1. Our faith is not polite. Have you read the Bible lately? The entire world is wiped out by a flood, God chooses an old barren couple, drunks, and murderers to carry out God's work, Job openly questions the world's (and God's) logic, Ecclesiastes mourns how pointless life is, Song of Solomon is Biblical erotica, the prophets demand that Israel and Judah care for the poor, Jesus proclaims that prostitutes and tax collectors will enter the kingdom of God before the wealthy, privileged & learned and then dies brutally on a cross, Paul and others meet similar fates, and great beasts are battled by angels. People have been martyred, voices suppressed, heretics burned, the poor have been fed, people take vows of poverty, chastity, or silence, spiritual disciplines practiced, wars fought. Congregationalists threw the original Tea Party, Bonhoeffer plotted to kill Hitler, Martin Luther King gave his life while battling for civil and workers' rights, and Mother Teresa fed and clothed countless children in poverty.

And yet so many churches and Christians in America seek, maintain, or market a polite, easy faith with clear answers and devoid of questions or expressed doubt. We're "in" and they're "out" and I'm not listening to the dozen holes in that logic. When a child dies "God just needed another angel," and if you're wrestling with a hard question "just put it in God's hands and it'll work out." Jesus' teachings are some nice things that he said to pass the time until the real reason he came to Earth: to die for me and everybody like me. And this life is all about anticipating the next one.

There needs to be a place for lament, anguish, and questioning. It wasn't beyond many of our faith ancestors, so why should we abolish it? Jesus' teachings, based on his upbringing in and knowledge of the Hebrew Bible, echo God's agenda to serve the poor. There's meant to be a riskiness to our faith that goes ignored so often. Our faith was never meant to be that polite, that easy.

2. The church is not polite. I already covered a lot of this above. Besides that, I've experienced the church's non-polite side several times. Usually that non-polite side comes out when one's sense of politeness is threatened. The system gets threatened in some way, and in efforts to pull things back to status quo, people can get ugly. Anything between a minor change in worship all the way up to a denominational body voting to expand rights to minority groups, these sorts of things can cause splits, dissention, or the dissolution of relationships.

At the same time, churches have been able to move forward and do wonderful things when eschewing politeness and having difficult conversations about changes in philosophy, about who to welcome, about hard or embarrassing moments in church history and about doctrines that seem strange or ambiguous once one gets past the surface. These things can cause some to lash out, but it can also deepen relationships, faith, or the church's calling that were unimaginable before that conversation happened.

3. Life is not polite. People with 30+ years experience in one company suddenly get laid off. Cancer, diabetes, mental illness, and countless other afflictions can interrupt the lives of individuals and entire families. New forms of technology and media can alienate as much as it can unite. People suffer from forms of physical, emotional, sexual, and spiritual abuse at the hands of trusted figures, let alone strangers with their own unspoken issues. We can only insulate ourselves from life's harsher features so much. Sometimes people seem to use faith and church as part of that insulation, but it may not help considering everything written above.

The solution to any of these is not insulation, but acknowledgement and active wrestling; owning up to what is happening, calling it for what it is, and seeking true help where it can be found: relationships, assistance, people willing to wrestle alongside the one in pain, and faith if it seems helpful (not all forms will be).

This is why I don't write polite stories on this blog. Politeness just isn't a big part of many people's life experience. I'd rather deal with that experience instead of trying to create a view of the world that isn't true. I'd rather acknowledge pain while celebrating joy, deal with questions and express silliness, be honest about doubts but also encourage faith. Faith, church, and life are both/ands. That's why this blog is, too.
By Jeff Nelson
Email ThisBlogThis!Share to TwitterShare to FacebookShare to Pinterest
Labels: Blogging, Church, Ministry
Newer Post Older Post Home