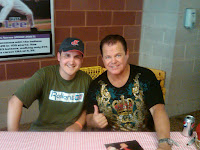 I finished Brian McLaren's A New Kind of Christianity this week. I'd been reading it off and on for months as part of my book discussion group. I wasn't actually sure what we're meant to discuss for next time so I just went ahead and read the rest. If you're already familiar with McLaren, nothing will be tremendously new here. Also, if you're familiar with 200+ years of modern Biblical scholarship and theological traditions besides fundamentalism and neo-Calvinism, nothing will be tremendously new. I understand that McLaren is writing to an audience within Evangelicalism disillusioned with the same old, same old, but emerging/emergent really are behind the curve theologically. I have an entire post in me about that, I think. So stay tuned.

My brother and I went to an Akron Aeros game last weekend because Jerry "the King" Lawler made an appearance to throw out the first pitch and sign autographs. We signed up for a special meet and greet before the game, during which we could take our time and talk with him a little more. Jerry told us how he prefers wrestling to commentating, his origins in the Cleveland area, and his meeting Snooki at Wrestlemania, among other things. He was very personable and seemed to like chatting with fans. My personal favorite moment was when he went to sign a picture for me and we shared our disdain for the weird way to spell Jeff with Gs and Os and whatever. Then my brother and I got to sit up in one of the luxury boxes for the game, which was fun as well even though the Aeros got blown out.

We watched the first episode of NY Ink this past week. Ami James has left his Miami shop and has come back to New York to start a new gig. The shop itself looks like an art gallery, which James made a point of doing as he shares that he wants to be seen as a true artist. This first show had some drama, particularly between two of the shop managers, but moreso between Ami and an artist who basically seems to walk off the street and ask him to return a favor from back in the day. Ami lets him stay, and he immediately clashes with everybody else. Since it was only the first episode, it's hard to tell yet whether this show will go the way of Miami Ink, which was more about the customers and their stories, or LA Ink, which is more about the drama between the artists. Early indications are that it'll be the latter, but we'll see.

Metanoia, the blog of a mother, candidate for ordination in the PC(USA), and spiritual director--among so many other things--has been added to the bloglist.

Here's the trailer for the final Harry Potter film, which WOO!