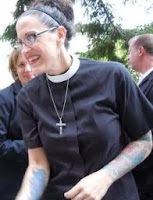 One of my pastoral heroes nowadays is Nadia Bolz-Weber. She is one who is ordained in a mainline tradition (ELCA) and who treasures the heritage of that tradition, yet who also has an eye on how the culture has changed and what the church may need to do to relate to this new moment. I've learned a lot from her and have been thankful for her contributions to the larger conversation regarding what the mainline should be about decades after our "glory years" have passed.

Nadia gave an interview last year on God Complex Radio, during which she made some comments about ordination, and I thought that they were so good that I wrote them down in a Moleskine:

As I've waded through the waters of the emerging/emergent/missional/contempervant church and the writings of its main proponents, recently I've started to question the place of pastoral authority. Am I special? Am I set aside or set above others? Do I really have to wear a tie on Sundays even if nobody else does? Are vestments still helpful? What does being a pastor and executing the duties of the office mean nowadays? These questions and more have been swirling around in my head for months.

Honestly, it started with the vestment question: are they still useful, or could I relate to people better by not wearing them? This had a couple different components to it. First are the comments about my "dress" that I mentioned in my last post. In a less casual time in this and many other churches' lives, what do these outward symbols of my vocation say to people nowadays? Do they really say anything?

A new person who eventually joined first visited on a Sunday when I didn't vest due to our hosting a guest preacher. I still served as liturgist, just in coat and tie instead. When we started meeting to talk about her joining the church, she recalled that Sunday and how positively she had responded to the lack of robes. She'd been a part of a more conservative denomination that used vestments and to see me up there without robes was refreshing to her. She still recognized me in my particular role, but didn't see vestments as necessary for that. In fact, she seemed to find me more approachable without them.

Second, I'm big on the concept of the priesthood of all believers, the belief that I may be the pastor, but we're all ministers called to serve according to our gifts. What do my vestments mean in light of that belief? What does it mean to be "set apart" as pastor in light of that?

Naturally, the vestment question eventually expanded into the larger question of ordination and its authority. I'll deal with this specific issue in Part 3. For the purposes of this entry, I want to focus on two other things: approachability and symbolism. I occasionally wonder whether those people who comment on my alb see it as a barrier; don't see me as approachable. Of course, they think I'm approachable enough to make the comment to begin with, so maybe that's not the issue for them. For some, the symbolism of traditional clergy attire gets in the way for at least one or both of the following reasons: 1) the symbolism isn't understood, or 2) the symbolism carries a negative stigma either due to a personal experience or to a cultural meme of clergy as scam artist, abuser, purveyor of rigid traditionalism, etc. Either of these reasons could lead to the conclusion that such symbolism shouldn't be used or has lost its effectiveness, and should be discarded. And this is how we end up with churches forsaking any and all Christian symbols from worship spaces and pastors preaching in suits or jeans. There's nothing wrong with those things per se, but should symbolism simply be done away with so completely?

I bought a denim clergy shirt a couple years ago. It was mostly done as a joke. It was on the clearance rack at Cokesbury, and seeing it caused me to recall a RealLivePreacher essay about buying a denim clergy shirt, wearing it to a disc golf course, and shocking a couple Gen-Xers with his behavior. Inspired by that essay, I picked it up, unsure whether I would ever actually wear it. I am not a very formal person if I can help it. I do like the feel and look of a suit, but I don't wear them unless I have to. I don't wear a tie if I don't have to. I don't dress up for the office if I don't have to. I've toyed with the idea of a visible tattoo to loosen up those who aren't sure about pastors in general, as if to say to them, "It's all right. I'm on your side. I'm one of the good guys. Let's talk." I want to exude that aura in my ministry whenever possible, and to me what I wear is a big part of that. RLP could visualize a way to make a denim clergy shirt do that, so I figured I'd scoop it up off the sale rack and maybe try it out someday.

It was months later on a day that I had to make a hospital visit when I spotted the shirt hanging in my closet and thought, "Why not?" I pulled it on with khaki pants and my blue blazer complete with UCC pin and checked myself in the mirror, marveling at the strangeness of that tab. I know Protestant clergy who wear these, but I certainly wasn't used to seeing myself in such a thing.

Anyway, as I walked through the halls of the hospital, something amazing happened. I received more acknowledgments and smiles that day from passersby than I had in years coming to this place in just a shirt and tie. On those days, I was some guy that people ignored. On this day, however, I was wearing something that designated me in a particular role causing many to react much differently. I have to imagine that it also repelled some people, but it wasn't noticeable. For the most part, on that day my collar had made me more approachable. It made something clear to everyone about who I was and what I was about, and from what I could tell the response was very positive. I wore my clergy shirt again a few months later, and the same thing happened: smiles, nods, access to people in a different way. Amazing.

Much more recently, I've purchased several more collared shirts and have begun wearing them for worship and on other occasions. The other week, I got word of a church member in a restricted unit of one of our local hospitals. Figuring that I'd have an easier time getting to see her if I wore a collar, I put on a traditional black clergy shirt and set off. There was no hesitation at the desk telling me where she was, and the woman there even made it a point to make small talk, something that I've never experienced at this desk over the past 6 1/2 years. Several other hospital workers made it a point to say hello as well. When I walked onto the unit, someone (not my patient) stood, held his arms out wide, and said, "Father!" After visiting with my patient, this guy requested that I talk to him for a while. On the way off the unit, a third patient wanted to chat as well. None of this would have happened, nobody would have thought me approachable, without that collar. That symbol of my office opened doors that otherwise would have remained closed.

I bring up Nadia because she wears collars, at least for Sunday worship. She's grounded in her tradition; she does it out of respect for her office. The quote from Nadia above shows that perhaps she sees it as a symbol of servitude, of being yoked to her role. At the same time, obviously, her visible tattoos provide an outward sign that she's not what you think even when she wears the collar. Moreso, I might argue, her personality helps offset assumptions that may arise with the collar alone.

Vestments and collars, first and foremost, serve as symbols of the sentiment in what Nadia says: pastors are set apart for a particular role. Even as she has striven for a model and philosophy of church that addresses our new cultural moment, here she is in these traditional symbols of her vocation, unwilling to give them up even as she recognizes that so many other things cannot remain as they should. Why? Because, as Nadia says, her role sets her apart. She is not just "one of them." She kind of is, but she isn't. There is a balancing act to be kept between approachability and one's role in the community. Thus a collar or stole as a symbol of that role can still have value regardless of a cultural attitude that generally has become more relaxed about such symbols.

If my hospital experiences while wearing the collar is any indication, there is a certain respect, even hungering, for such symbolism to be retained or recaptured. A collar clearly designated my role to others and seemingly opened doors to people's attention that hasn't whenever I've made visits without one. In a culture where many Christians have lost an understanding of or appreciation for symbol, it may be that such a clear designation is still appreciated, still desired. And there may be ways to redeem that symbol without doing away with it.
By Jeff Nelson
Email ThisBlogThis!Share to TwitterShare to FacebookShare to Pinterest
Labels: Church, Clericals and Vestments, Ministry
Newer Post Older Post Home