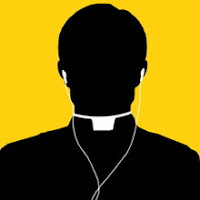 I've now been wearing a collar on Sunday mornings and on other occasions that I deem appropriate for over a month. I've already shared my experience on a hospital psychiatric unit that solidified my conviction that this was a good idea. Predictably, this addition to my wardrobe invited some questions from church members about it, which I gladly summarized in a recent newsletter article to help people understand. Those reasons are summarized thus:

1. A sign of my role. While scouring the internets looking for reasons why other pastors wear them, a common analogy that I read over and over was that of collar as uniform. Police officers, doctors and nurses, mailmen, military personnel, etc., etc., etc., wear uniforms that clearly designate them in their role. The collar thus is a pastor's uniform. And there are times when one needs to know who the pastor is in the room.
2. The collar is a symbol of servitude. The metaphor is much more abrasive today, but the collar is sometimes called a "dog collar" or is taken to symbolize slavery to Christ. Whether those particular metaphors are used, it remains that the collar symbolizes servitude to God and not a symbol of supreme church authority. More on this in a minute.
3. Accessibility. You've read the psych ward story. If I hadn't worn a collar that day, people would have questioned my presence on that unit if I'd been let on at all, and I wouldn't have had the extra conversations that I had either. My experiences while wearing a collar have been the direct opposite of the effect I thought it would have.
4. It takes me out of the equation. No admiring my snazzy suit or tie. Just me in a solid-color shirt and tab.
5. No more ties. Boo yah!

The strange thing is, just a few weeks prior to my making the decision to wear a collar, I was gearing up to get rid of vestments, let alone start wearing clergy shirts. And it was because I was wondering whether such things get in the way for people, as denoted in Part 1. One of my main concerns regarding this was that such things are seen as authoritarian; that they designate me as special or that they perpetuate the theologically flawed concept that I am the only one who ministers to people. I'm the professional with the M.Div, after all. Furthermore, such status in a faith community often may lead to a privileged position that enjoys many extra perks and respect, the very thing that Jesus warns his disciples about:

Then Jesus said to the crowds and to his disciples, ‘The scribes and the Pharisees sit on Moses’ seat; therefore, do whatever they teach you and follow it; but do not do as they do, for they do not practise what they teach. They tie up heavy burdens, hard to bear,* and lay them on the shoulders of others; but they themselves are unwilling to lift a finger to move them. They do all their deeds to be seen by others; for they make their phylacteries broad and their fringes long. They love to have the place of honour at banquets and the best seats in the synagogues, and to be greeted with respect in the market-places, and to have people call them rabbi. - Matthew 23:1-7

It's worth noting that there is a lot that can be nuanced about this passage, first and foremost about the Pharisees being made the two-dimensional bad guys in the Gospels and second about people who deliberately use their positions in this way vs. those who humbly serve in their role. But the overall sentiment is one that I have taken very seriously of late. Between wondering if vestments get in people's way and wanting to be as accessible to people as I can, I was on the verge of eschewing all formal signs of authority as part of what I thought was the best way to do that.

At the beginning of May, I took a week's vacation. Over the course of that week, I listened to the sermon from my ordination service three times. On that afternoon, the preacher for the day talked about a multitude of things related to ordained ministry. He talked about wrestling with God like Jacob and walking into the pulpit with a limp, he talked about being a "keeper of the Word and its integrity," he talked about the call to guide others in the meaning of the Gospel, and he gave a piece of advice that I've always remembered: "If today you feel like a king at a coronation...get over it." And he followed it up with this: "People will humble you before they'll follow you."

I can attest to that. In the past seven years I have been humbled more times than I can name. I've been reminded over and over and over again that ordained ministry, even with its clothing of designation and distinction (meaning simply that it makes me distinct), is not meant to be a position of privilege like a king. I am, as my collar indicates, a servant. I am a pastor. That is my vocation, my calling. I am an empowerer and guide and leader of a flock of ministers. I am not better than them, I am simply called to a particular role among them. For many, clergy shirts and vestments are the outward marker of that role, which is one of servitude and not of power. Ordination is not coronation: it is the act of designating a person for this servant role.

So I wear my collar, sometimes with sneakers and sometimes even with jeans (I can be casual in other ways). But I wear it knowing what it means and who I am as I wear it.

Perhaps the question with which I wrestle the most often regarding ordination and vestments is their place in this new moment that is happening in American Christianity. Postmodernism, that ideological shifting of authority that many scholars and leaders of the church say is happening, certainly affects the pastoral office. In this age where information is available to all at the click of a button, where the "expert culture" of clergy and church has been questioned, and where there debate of how best to educate pastors besides or in place of the traditional route of seven years of schooling, what sort of authority does ordination carry? Is a pastor wearing a collar out of place? Is a pastor out of place, period?

Yes and no. In the past 60 years (though really, much longer) there has been every attempt to make pastors as un-pastorish or un-expertish as possible. The eschewing of vestments and collars and even any formal attire at all as made notable by some churches calling themselves "emerging" have been in part to remove some of that distinctiveness, to make the pastor as approachable, as informal, and as non-expert-seeming as possible. Furthermore, certain strands of Christianity are suspicious of clergy who are too educated, as if too much knowledge will stifle the work of the Spirit and transform leaders into dry, ineffective valleys of bones. The more the pastor seems just like you, the reasoning goes, the more appeal he or she will have.

I understand that reasoning, and I actually like a lot of it. I don't dress up if I don't have to. Before I started donning a collar on Sundays, that was the only day of the week I wore a tie, excepting weddings and funerals. I wear jeans to the office whenever possible, and sometimes even to visit parishioners. I want to be accessible, and I don't always see the value in formality.

And yet I can't shake my recent experience on that psych unit. As mentioned, I can wear a collar but still find ways to be informal. I wore jeans to the hospital that day. That wasn't important to people; the collar was. That's all everybody saw. It immediately opened people up to a level of sharing that wearing jeans and anything else wouldn't have. I was seen as the authority, the one set apart to be consulted, confessed to, and questioned.

It's been my experience that, for all the pontificating by authors and speakers, this culture still craves symbol and people specifically designated in their roles by those symbols. This is not a universal thing, and in those cases personality needs to pick up where symbol fails.
By Jeff Nelson
Email ThisBlogThis!Share to TwitterShare to FacebookShare to Pinterest
Labels: Church, Clericals and Vestments, Ministry, My Journey (so far)
Newer Post Older Post Home