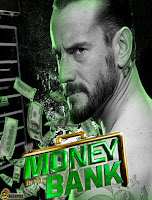 I'm a little further into Cutting for Stone now, which is about the lives of twins born to a nun in Ethiopia. While the book will focus on their relationship, I'm still at the part recounting the life of their mother and their birth. For me it's been slow reading, not because the story is slow but just because I haven't devoted much time to reading. So until I can make it deeper into the novel, I still can't really say too much about it.

We ordered WWE Money in the Bank this past Sunday, so named for the two featured eight-man ladder matches where wrestlers compete to climb a ladder and pull down a briefcase containing a contract for a World Title match (Did that make sense?). These two matches were decent enough, although I never would've guessed at Daniel Bryan winning the one match; Alberto Del Rio winning the other was to be expected, though. But the big anticipated match, the reason I and probably most others ordered the show, was the CM Punk vs. John Cena WWE title match. I posted one promo from Punk the other week; here's the one that aired the week leading up to the event:

Long story short, after an awesome match in Punk's hometown of Chicago in which he was the clear favorite, Punk ended up winning the WWE Title, running out through the crowd to celebrate. He has since tweeted pictures of the belt in his refrigerator and at a Cubs game. And THEN, he crashed the WWE discussion panel (featuring HHH, Rey Mysterio, and Bret Hart) at Comic-Con:

And thus continues one of the greatest storylines in years. I haven't felt this excited to be a wrestling fan in quite a while. In recent years, the Hart and Rock returns have been great and I'd rank my excitement for those being pretty close, but this is something else.

A recent article in Entertainment Weekly made the observation that nearly everyone in True Blood has undergone a big character change, and honestly I think that's why I've been liking this season more. Tara is hardcore rather than whiny, Bill is a little more sinister instead of Southern Edward Cullen, Sookie is more just fed up with everything instead of a nag. At the same time, I pretty much hate the Jason werepanther storyline (which the other week included a gang rape scene) and for me the jury is still out regarding the witch storyline. Getting more of the head witch's backstory will help with that, I think.

The eighth and final season of Entourage starts this Sunday. Here's the extended trailer:

And here's the Beastie Boys' "Sabotage," parodied by 4-year-olds: