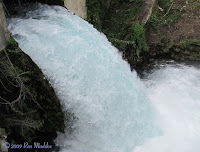 I've started meeting with my spiritual director. We've carved out an hour or so on Tuesday mornings at a local Panera to drink coffee, eat bagels, and talk about where the divine presence is in the midst of even mundane places like that. We've hit it off pretty well, I think. He's an older, gentle-speaking guy, active in his Catholic faith. That he's Catholic may give some pause, as if his tradition may be too stark to one's own if one is a Protestant. I'm actually glad for the difference: it helps me think beyond my own tradition, and I think will help me learn Ignatius more in his context. As a bonus, his son graduated from the University of Michigan, so we're doing just fine together.

At this point in the process, I'm in a time of preparation for the Exercises, not yet experiencing them. This consists of working through a series of scripture passages, one per day, and prayerfully wondering how each passage may speak into my own life. "Try putting yourself in the place of the different characters," came one suggestion. "Linger on words and phrases," came another. Having practiced Lectio Divina at times, I'm familiar with suggestions like these, but it's good to be reminded and to process insights with another.

During a recent meeting--not that we've had that many--we somehow got on the subject of keeping thoughts and feelings bottled up, which Coffeewife will tell you is an issue of mine. We've actually been talking about this quite a bit lately, and I've been encouraged to change: better to share more readily and openly than to blow up over some minor thing. I like to think that the past month or more have seen some very positive steps toward correcting this, for which both Coffeewife and I are both very glad.

As my spiritual director and I discussed some of this, he mentioned Ignatius' writing about the Dark Spirit. I don't know what your thoughts are on Satan or the devil or the Dark Spirit or whatever term you prefer; whether evil is somehow personified or whether it's more of a force or whether evil is simply of our own making or something else besides, but apparently Ignatius believed that one of the major tactics that the Dark Spirit uses is to get people to bottle themselves up, to keep things hidden and suppressed. Lately, I've been learning more about what this can do to people: it can damage or end relationships, it can affect physical health, and it can stifle emotional and spiritual growth. Even if you don't believe that the Dark Spirit is a being as such, I think most people can agree that such bottling can lead to suffering and pain, at least some of which we may call evil.

With this conversation fresh in my mind, I turned my attention to the suggested texts for the week, and came to part of the story of Jesus meeting the Samaritan woman at the well in John 4. Shortly into their conversation, Jesus begins to talk about living water:

I was stuck on the word "gushing" for quite a while. Gushing calls to mind something abundant, moving, and hard to contain. Something that gushes can be overpowering, and it splashes indiscriminately on anything within a close enough range. Something that gushes is not easy to bottle up, if bottling it up is even remotely possible. Try to bottle a waterfall or a geyser or a spring or a river. It's a fool's errand; it just can't be done. There'd be way too much to account for, and the water would likely rip your puny bottle from your hand.

"What is gushing in your life right now?" This was the question posed to me at our most recent meeting as I shared some of these thoughts. My answer was the affirmation and activity I've been experiencing at my church lately. We've moved into an incredible season where our ministry together has been flowing in the same direction in vital and wonderful ways. Of course, I wouldn't have thought to call such happenings "gushing" until this gathering, until scripture had provided the metaphor for reflection.

I think that when something is gushing around you, whether a relationship, a good period in your career, a joyous moment with family or whatever else, it only fuels one's own gushing. If something wonderful is happening around you, it may happen in you as well. If one of your children does something amazing, you'll gush. If you experience a triumph at work, you'll gush. If you experience clarity in your spiritual life, you'll gush. It's hard to keep stuff like that inside; you need some kind of release for it whether that means telling someone or writing it down or shouting it through a megaphone in a crowd. You gush. You can't keep it bottled.