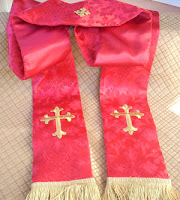 Yesterday was the 40th anniversary of my dad's ordination. My "home" church celebrated with him this past Sunday morning, which included inviting me to preach. This is what I shared that day.

He's already called a few. Earlier in this same chapter, he called a couple fishermen. Besides that, he's been traveling through the region and making a name for himself by healing, teaching, getting into arguments with religious authority. He's been proclaiming his message of the kingdom of God. And all of this together has intrigued people enough to want to follow him. Besides specifically calling some, many others have been struck by what he's been doing, and so they've been tagging along as well.

As they're traveling, they come to a booth where Levi the tax collector is sitting. He's collecting tolls on goods people are moving from one place to another, as well as taxing people who are traveling. Otherwise, he's being avoided: people probably didn't interact with tax collectors if they didn't have to: they were seen as Roman puppets, sellouts against their own people, scammers who skimmed off the top for themselves. They were outcasts. So even when Jesus and his group approach, most if not all of those traveling with him are probably wanting to ignore him.

Of course, you can't really take Jesus anywhere, as he'll inevitably end up embarrassing you somehow. That's confirmed again here as Jesus strolls right up to the booth and says to Levi, "Follow me." And that's it. There's no sales pitch, no explanation of benefits, no protest sign, no mini-booklet with four easy steps. Just, "follow me," and that's it. And that's all it takes: Levi drops everything and follows.

Later that day, Levi throws a banquet for Jesus. And we're told that many other tax collectors attend, which invites the question, "Who else would have attended?" Given how they were viewed by most, it may have been that they only really hung out with each other. Jesus shared table with many different people, and of course this irked the Pharisees. In this instance, they ask the disciples about why he does this. Why has he accepted this invitation; why does he do this so often? It's as if they're questioning his credibility: if this is who he associates with, why should we listen to what he says about God? Jesus overhears this and, rather than allowing the disciples to stumble through their own answer, he says, "Those who are sick are the ones who need a doctor. Those who are sick are the ones who need healing."

Think about that statement for a second. On the face of it, the meaning seems obvious. Jesus has been healing, he's been teaching inclusion, he's been forgiving. But what has Jesus done for Levi? He has no sickness that we know of, he doesn't seem to be possessed by a demon, he's not considered ritually unclean (although people probably thought he was unclean in other ways). As far as we know, the only thing that Jesus has done for Levi, Levi's only reason for giving this banquet for Jesus in celebration or thankfulness, is that he was called.

How often do we think of Jesus' call being a healing thing?

We're celebrating several things this morning. First, we're celebrating ordination. Specifically, we celebrate 40 years of ordination as of tomorrow. 40 years! That is so far off my radar! I have almost 7 and I think that's great! We can roughly break down these 40 years into two blocks. The first 20 years were spent in settled, full-time local church ministry as a pastor. The next 20 years have been spent in a multitude of ways: at the Wayne County Library, on the Church and Ministry Department of the Association, and working with interim ministers in Ohio.

Now, some--way too many, I would argue--may look at that 40 years and only see the first 20 as "ministry." They may look at those 20 years as a full-time settled pastor and say, "That's clearly ministry." But if we only counted those years, we'd be ignoring so much that we can consider ministry: deepening people's learning through books and other media, encouraging others just starting in ministry or long-established, working with churches in transition as they figure out who they are and who they want to be.

Today, the last Sunday of October, is also Reformation Sunday, a day to celebrate and remember the events surrounding the Reformation and the work of Reformers such as Martin Luther, John Calvin, and Ulrich Zwingli. Among other things that we remember today may be Luther's concept of the priesthood of all believers, the idea that it's not just the ordained people up front in the funny outfits who are called to ministry. Instead, according to Luther, we're all priests, we're all ministers according to our gifts and passions, whether ordained or not.

Those of us who are ordained know these moments of doubt and disappointment. As both a pastor's kid and pastor, I've seen them. And those of us who aren't ordained know them as well: doubts about our ability, disappointment when something we're a part of doesn't go well, or generally wondering how it is that what we do can be considered ministry at all.

Healing comes through remembering. Healing comes through remembering when such clarity did come, or when we've been affirmed or appreciated by others, or the promises made at baptism or confirmation or, for some, ordination. Healing may come when we remember that we do have a call and when we remember the presence of the One who called us. Healing may come by remembering that God sees something wonderful in each of us and is ever calling it out.

Jesus is collecting disciples. Jesus says to each of us, "Follow me." Follow me into a new, transformed life. Follow me because you are my beloved child. Follow me because you do have something to offer. Remembering all that can be very healing indeed.
By Jeff Nelson
Email ThisBlogThis!Share to TwitterShare to FacebookShare to Pinterest
Labels: Bible, Church, Ministry, United Church of Christ
Newer Post Older Post Home