When to Wear a Headset 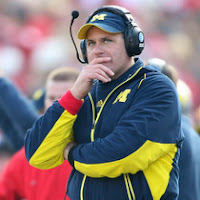 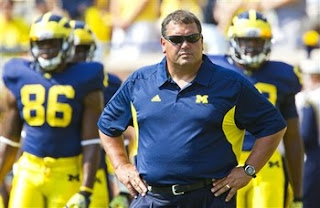 When Brady Hoke was hired as MIchigan's new football coach, there was no small amount of skepticism among certain parts of the fanbase. Some were simply glad that the team had someone new at the helm, others expressed doubts about the timeline of the hire, and others wondered about Hoke's less-than-stellar resume. As the year wore on, I think Hoke has won more and more people over, and now that his first season is going very well so far (except that one time, and that other time), a non-believer is perhaps becoming harder to find.

When Michigan lined up to play Western Michigan the first game of the season, I and others picked up on something fairly quickly about Coach Hoke. We already know that he likes to point. He also says "well" a lot (man, that video I wanted to upload would've been AWESOME). But that day, I and many others noticed something else. I myself found it so significant that I texted my brother about it:

Interesting that he's not wearing a headset.

When you're wearing a headset, you're connected to people in the booth. Whomever is sitting up there, whether a coordinator or other coaches or staff, you're in their ear when the headset is on. You're making decisions, consulting, giving orders. You're more in control when you have a headset. On the sidelines, fans are accustomed to seeing the head coach wearing one; every Michigan head coach in the modern era usually has had one clamped on their heads nearly the whole game every week, as do most head coaches besides.

Rich Rodriguez developed a reputation for micromanaging his program while at Michigan. He ran the offense and special teams, but also was in his defensive coordinators' ears just enough to make them run a system they didn't know. I have to point out, of course, that every coach has his own style and gifts. RichRod's gifts mainly stemmed from his being an offensive guru: he invented the spread, and naturally was going to be in charge of that side of the ball. It's what he knew and was good at, so that made sense. If there was anything learned about him while he was Michigan's coach, however, it's that he didn't know much about what it took to play defense in the Big Ten. While letting Scott Schafer and Greg Robinson just handle their business may or may not have produced better results (signs from his current run at Syracuse indicate that with Schafer, they might have), trying to do too much ended up hurting the team on Saturdays.

Brady Hoke has a very different style. He has two highly reputed coordinators, and he does indeed let them handle their business. Of course, he has an overarching vision of what he wants his team to do and where he wants the program to go, but he exhibits a certain humility as well. He's been caught with a headset on the sidelines, but he doesn't wear one the whole game. He consults, advises, moves among the coaches, but also lets the people more gifted and knowledgeable than him do what they need to do, and he doesn't feel the need to be in their ear all the time. He manages, but not overly so.

I like to think that I have a pretty good idea about what I am and am not good at in ministry. I like to think that I have a good handle on preaching and worship, on coordinating projects related to mission and other special events, and facilitating discussions related to visioning or that help people in ministry reflect on what they're doing. I also know that while I think I'm good at teaching, I quake in fear at restructuring or developing a vision for Christian education as a whole. I'm not energized by it; I have no clue what will work. In that area, I'm better off consulting someone else or just letting other people do their thing. Likewise, I find budget discussions awful and don't know how best to reinvest a CD that has come due or whatever. Furthermore, I can swing a hammer decently enough, but don't put me in charge of a building project.

Unless it's to hear what someone with the necessary gifts and knowledge is doing, I have no business wearing a headset for certain activities of a church's life. Perhaps I'm meant to offer a certain amount of vision and theological insight, but besides that I'm better off leaving things in the hands of those who know better.
By Jeff Nelson
Email ThisBlogThis!Share to TwitterShare to FacebookShare to Pinterest
Labels: Church, Ministry, Sports
Newer Post Older Post Home