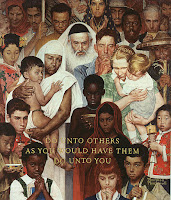 On Monday night, the Republican candidates for president had yet another debate, this time in South Carolina. I haven't made it a point to watch them: there have been so many, I don't want to devote 2-3 hours to watching them, and WWE Monday Night RAW was on (which, you know, same thing). I do tend to read up afterward and watch the running commentary on my Twitter timeline during the event, so I stay in the loop in my own way.

So I'm reading the commentary during Monday's debate, and all these tweets start appearing about the "Golden Rule" being booed by the crowd. For those unfamiliar with what that term refers to, Jesus' version appears in Matthew 7:12: "In everything do to others as you would have them do to you; for this is the law and the prophets."

Anyway, as I read tweet after tweet referring to this event, I became incredulous. A state known for a more conservative, evangelical population booed one of the most well-known statements Jesus made? Turns out that they did indeed:

Scattered boos and jeers drowned out Paul's call for a "golden rule" in American foreign policy.

"My point is, that if another country does to us what we do to others, we aren't going to like it very much. So I would say maybe we ought to consider a golden rule in foreign policy," Paul said as the crowd laughed and jeered. "We endlessly bomb these other countries and then we wonder why they get upset with us?"

And if you still don't believe it, here's the video:

Those sound like more than just "scattered" boos to me. And yet the crowd turns right around by the end and cheers pulling out of the wars that we're in. I found that confusing.

My question is a simple one: How is the Golden Rule booed in a country that so often claims to be Christian? While versions of this adage appear in most religious traditions, we here would be most familiar with the Christian version. It is fair to say that those who were at that debate the other night would have heard Jesus' version in their heads when Paul referred to it. Ergo, one of Jesus' most recognizable and well-known statements was booed. Meanwhile, a statement made a few moments later by another candidate about killing our enemies (Jesus had some things to say about that, too) was greeted with a standing ovation.

Many Christians in the United States advocate endlessly for prayer in schools, for plaques referring to Christian precepts hung in state buildings, for "under God" to be left in the pledge. When tragedy strikes, there always come some suggestions that if these things were left alone they might not have happened, either because we're being punished for abandoning God or removing these things contribute to some larger erosion of morals in society.

If the former explanation is true, then what do people think God has to say about booing Jesus' teaching? If the latter is true, clearly even the "most Christian" among us need more reminders.

This debate incident is the latest in a long string of events that show that plaques are not the real solution to making the United States a more Christian nation. Hang the Ten Commandments in every statehouse in the country, force kids to say the Lord's Prayer every morning, but what's your heart like? When was the last time you helped someone struggling with poverty? When was the last time you forgave an enemy? When was the last time you did to someone else as you'd have done to you? I do get why people would boo that sort of thing: it's hard. It makes us uncomfortable and pushes us to pay more than lip service to this faith that we proclaim.

What's going to mean more: displaying a Bible verse or living out what the verse says? Dictating that kids all pray, or nurturing a culture that reflects a spirit of prayer featuring peace in community? Saying "under God" or living like you really are under God? Coercion, intimidation, and an unbending judgmental standard or genuine relationship, kindness, and an appreciation for the specifics of another's story, particularly as it relates to God's Great Big Story?

The bottom line is that what would truly make us a more Christian nation is Christians acting like Christians. And I don't mean railing about the culture war cause du jour, I mean doing the hard gritty everyday stuff of love and forgiveness that Jesus taught and exhibited, that pushes our boundaries and gets dirt under our fingernails for the sake of the Kingdom. It's that kind of stuff--the stuff of a real transformed life and not an endless campaign to force conformity--to which Jesus calls people. After all, Jesus said, "You'll know them by their fruits."