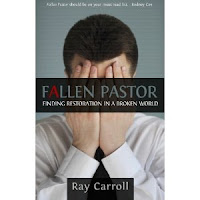 The problem in asking “why” is the fear of justifying the act. Reconciliation is virtually impossible in most situations because the prevailing church culture never wants to condone what originally happened. And instead of seeking our reconciliation and restoration, which are the hallmarks of the church, we ignore the problem hoping it will go away. It never does. The only way to answer the question is to face it and listen to it. - Fallen Pastor, p. 50

In my personal quest to seek out and define the hallmarks of a longer pastorate, I've discovered two things: 1) there are many more than I realized, and 2) they're the sorts of things that pastors constantly hear about doing. I've written before that there is no magic bullet for building a long-term relationship with a congregation. Instead, there is only the intentional and the mundane: taking time off, seeking a support network, and intentional time with family, among others.

There can be darker consequences when pastors do not pursue these sorts of things. As Ray Carroll observes in his book Fallen Pastor, there are much worse things a pastor may end up dealing with than a brief pastorate if he or she isn't vigilant about taking care of oneself.

I randomly discovered Carroll on Twitter one day. At that point, he was tweeting and blogging anonymously, recollecting his own experiences as a former pastor who'd had an affair with a church member. Like many others, I was taken by the parts of his story that he shared, which was and is quite heartbreaking for all involved. Eventually, he was inspired to write a book about his experiences, the experiences of others, and how to help pastors who end up crossing the line. Once he put the word out that he needed people to review the book, I volunteered and was sent an advance copy.

The first, quite lengthy section of Fallen Pastor contains stories from other pastors who'd given into temptation. The specifics of their situations vary somewhat: they're younger or older, serving smaller or larger churches, with or without kids, etc. However, there is a common thread that runs through the factors that eventually lead to affairs: they're overfunctioners who feel incredible pressure from the expectations that their churches place on them (and that they place on themselves) and who end up ignoring their spouses in the process. Carroll actually calls ministry "the first mistress" more than once, referring to when a pastor invests considerable more time and energy in his church than his marriage (in the book, all the pastors he interviews are men). He notes that many pastors do not have a wide circle of non-church friends or some sort of clergy group to lean on, thus being forced to act as "lone rangers" who also frequently assume their non-pastor spouses won't understand their problems.

Carroll notes these commonalities and explores them and basically calls out the entire system in the process. He argues that the church frequently sets itself up to be a culture where the pastor is expected to take on the vast majority of ministry planning and execution while congregants explicitly or implicitly tell him he's actually not doing enough. Carroll does eventually offer some pointers for both pastor and church to change behavior and expectations in order to produce a more healthy culture in which both may work.

There is also lengthy discussion of restoring a pastor after he is found out. Carroll notes a long process with many stages that pastors may go through before even fully realizing and admitting that what they've done is hurtful and wrong. He notes the helpfulness and importance of forgiveness, therapeutic measures, not abandoning the pastor in his darkest moment, and refocusing on Christ rather than success particularly if one ever feels called back to ministry.

The book is written in a very accessible format and style. There were some grammatical and spelling issues that I hope were addressed before the book actually went to print. There were also several ways in which I took issue with the book. First, Carroll places great emphasis on the crossing of the "physical boundary," implying that that is when an affair officially becomes destructive. While I agree that it is a point of no return, I think that the earlier points in the affair are just as troublesome and damaging. If a pastor is spending more time and emotional investment with another person, that may lead to crossing into the physical, but it has already become unhealthy for all involved and affected, including the pastor's own state of mind and the state of his marriage.

My other main gripe with the book is one that can only be helped so much. Carroll comes from a Baptist background that only recognizes the legitimacy of men in pastoral ministry and, as mentioned earlier, the book reflects that. He does interview pastors from American Baptist and Methodist backgrounds--traditions that do recognize women's gifts for pastoral ministry--but no women are interviewed. I would imagine that female pastors struggle with many of the same temptations and endure many of the same factors that could lead to misconduct as male pastors. If women in pastoral ministry can get past the male language used here, this can be just as informative and helpful a book for them as for men.

All in all, Carroll has written a good overview of the issues involved in pastoral misconduct and sin while also noting preventative and restorative measures.
By Jeff Nelson
Email ThisBlogThis!Share to TwitterShare to FacebookShare to Pinterest
Labels: Reviews
Newer Post Older Post Home