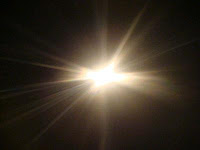 It's Epiphany. The 12 days of Christmas (yes, it's more than a song) are officially over. This is the day when pagan astrologers, curious about activity in the night sky they so adeptly watched, set off on a journey to find a child toddling his way around Mary and Joseph's modest abode, bringing him expensive gifts which no doubt raised his parents' eyebrows as they continued to make sense of their collective calling. This is a day to remember that, to remember God's manifestation in Jesus, to remember God's manifestation in all of existence, to talk about the light of the star and the light of our lives.

For me, this is a day seeking that manifestation as I wrestle with a couple things.

I wrestle with being de-friended on Facebook by someone declaring he would no longer be friends with Michigan fans. This was a fraternity brother with whom I was always on good terms, a guy I laughed with and hugged and supported during moments when the group was experiencing fracture. But that was ten years ago, so what is that to anyone now? I tested his resolve, leaving a comment on his status, telling him to make sure he de-friended Coffeewife as well. He didn't seem to give it a second thought. Now I wonder what irritates me more: that a supposed friend did this, or that sports fandom trumped anything else. Probably both.

I wrestle with this damn blog. Today marks seven years since I started, but something has been different for the past year. I feel stale and tired and worry that I'll end up hating writing if this goes on much longer. Change is needed before that happens, most likely time off and then a fresh start, something simpler and newly infused with joy.

I wrestle with what spiritual direction is doing to and in me. This isn't a negative thing, but I wanted to keep with the "wrestling" theme, so it sounds worse than it is. It's challenging me and inspiring me and stretching me in ways I haven't felt in years. I feel more creatively limber than I have in a while, and it's having an effect on my approach to ministry.

I don't wrestle with family, or church, or my calling, or anything like that. 2012 is off to a good start and God is manifesting all over the place. I squint to look past the clouds for the star's clarification to continue unabated.
By Jeff Nelson
Email ThisBlogThis!Share to TwitterShare to FacebookShare to Pinterest
Labels: Blogging, Church, My Journey (so far), Quotidian, Spiritual Direction, Spirituality
Newer Post Older Post Home