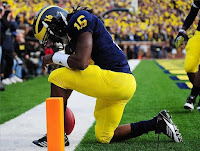 Thank God for Touchdowns. Greg at The Parish reflects on the act of "Tebowing," which for the uninitiated, is the term coined for Broncos QB Tim Tebow kneeling and praying in the endzone after a touchdown:

All that to say that Tebow's public expressions of faith don't trouble me. I do think it's worse than stupid to assume god gives two shits about the outcome of a game, but I understand why some fundangelicals believe he does. Tebow sports a Bible verse on his eye-black. So? At least it's not Leviticus 18:22. He prays. Billions of people pray. He prays publicly. You get the point. He's acting like a very committed, outspoken man of faith. Give it a rest, people. If you hate Florida, say so. If you don't like that he's big and goofy and gives all the credit to his god, say so. I will admit to some glee at watching his evangelical fan base gnash their teeth when I mock them with tweets about Dagon being god of Denver, just as Maher annoyed millions with his tweet. There seems to be this strange ability amongst certain people of faith to say that they know something isn't true (God cares about football games) while still holding onto a belief that it is true. Mocking them along that axis leads to anger and/or a bit too much celebration when Tebow wins. As one recent poster said: "Go Tebow! Go Jesus!" Yeah, words fail.

Greg goes on to make several points about how many people say they don't believe that God cares about football, but then in the moment their actions belie something else. He talks about football being viewed as spiritual warfare in these instances, which I'd never considered and am not sure I agree with.

As far as Tebow himself is concerned, Greg and I are on the same page: who cares? Both "sides" make way too much of his endzone prayers: atheists like Bill Maher, not to mention rival fans, see it as an invitation to tee off on him (or rush the passer, I guess, to keep with the football theme), while Christians use it as an opportunity to point out his public witness and complain about "persecution" when Maher says tasteless things.

Tim Tebow is not the first or only sports figure to thank God after a good play (and it's worth noting that in his press conferences he thanks God after wins AND losses). It's pretty crummy theology to suggest that God caused the play to turn out the way it did, but if an athlete is merely praying for focus, to be able to do the best they can, or giving thanks for their abilities, I don't see the big deal in that. Does Tebow overdo it? Sure, at times. But his faith has always been so public that at what point does the media and others just blow it up bigger than it really is?

What follows after these stats are suggestions as to why "oldline" churches may be turning away young people, among them lack of diversity in age and culture in leadership and aversion to technology.

I read this just as my church's Consistory is about to take on new members, and we're intentionally reaching out to some younger (read: under 40) folks to serve. This was a helpful time to come across an article like this.

Pews: not so much. Nadia Bolz-Weber's church sounds awesome:

Pews, especially lovely carved vintage pews, can be really quite beautiful and an efficient way of seating a lot of people at once. No question about it. But here’s the problem my church is having in finding a new home. We can’t abide pews. And it’s more than simply an issue of taste.

See, House for All Sinners and Saints (for the most part) worships in the round, with the altar at the center. There is not a large space set aside in front for the special people in robes to which everyone faces. Our liturgy (liturgy meaning “the work of the people”) is led by about 15-18 people who decided to pick up the worship booklets when they came in that have jobs written on the front. So from where they sit in the round, they stand and either say the prayer of the day or the Gospel reading or the benediction or any other number of elements of the liturgy. The absolution, sermon (usually) and words of institution are mine…the rest is up for grabs.

I'd love to uproot our pews and have a more versatile worship space. It's not a make-or-break sort of fight that I feel like having, but I certainly see the possibilities that Nadia describes. Hers sounds like a church that takes seriously the call for everyone to serve one another in community; this pew-less situation embodies that.

I imagine that some serious groundwork would need to be laid for such a thing to work: groundwork that would help people understand why a dozen worship books would just be set near the entrance for people to just pick up and help lead. We all have a part to play; we all have a calling. Amen. 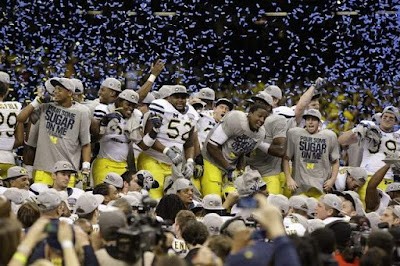