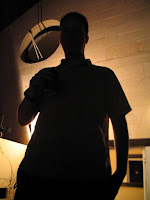 I am hunched over my computer keyboard in the late afternoon, feeling my eyes turning red and dry from exposure to the screen's penetrating light. I've barely filled a page, mostly single-sentence paragraphs, and it's as if they mock me for not writing more.

I reach for my coffee, freshly steaming in a mug I'd received before leaving for college. It's been washed so many times that the seal of my alma mater has faded, a dull brown against black rather than its formerly brilliant gold.

It is worn, and I am worn. But I know that I need to finish, and soon.

I take a moment to read over my work again. My attention wanders back to my drink, and I suddenly sense that I’m no longer alone. There was no sound of his approaching, he hasn’t said a word. His presence behind me, however, is unmistakable. I feel my chest tighten as this realization fully sets in, and I finish the action of sipping and setting the mug back down in order to feel some semblance of control, of normalcy.

“You seem to be having trouble. You weren’t considering flaking out on me again, were you?”

His words always carry an air of accusation. This would be true even if he was asking about the weather. The knot in my chest gets a little bigger and I fold my arms in order to hide the shaking. I still haven’t turned around.

“It’s just coming more slowly than it used to. You know that I don’t have as much time—“

“You haven’t made the time, you mean.”

I don’t bother to finish my sentence. He wouldn’t really be listening anyway. This is how it always is. My jaw goes rigid; I catch myself doing it and relax. I feel his impatience like tiny hot needles piercing the back of my shirt as the silence between us gets longer. He doesn’t really care about what I have to say, and yet he wants me to speak.

“So…want to give the excuses another try?”

It’s been long enough. I slowly turn in my chair to face him. He’s leaning against the doorframe, sipping from a mug that looks exactly like mine down to the last scratch. He smirks, not bothering to hide his contempt for me. He takes a sip, exaggerating the slurp while watching for my reaction. Even the most mundane act carries condescension.

It wasn’t always like this. The two of us had been cordial partners for many years. At that time, we fed off each other, tossing ideas back and forth like two kids playing catch. He was much more encouraging at that time; even shared the workload with me, as eager to create and entertain as I was. We were pretty much the same person then, and I take another moment to wonder when we began to diverge; what caused this relationship to become so uneven.

He instantly knows what I’m doing. “Knock it off and tell me why you don’t have something ready yet.”

I feel a slight surge of adrenaline at this and ponder throwing my coffee in his face. He knows this and chuckles.

“You’ve wanted to do that for a long time, haven’t you? Go ahead and see what happens.”

I take a deep breath, opening and closing my fist a few times. This calms me enough so that I can speak.

“I should have something ready in another day or two.”

He stands up straight, letting out an exasperated sigh. “It’s already been three days. What’s been taking you so long?”

He knows what’s coming even before I say it.

“I already tried telling you. I haven’t had as much time as I used to. Stuff like this doesn’t just pop into my head and run down out of my fingers any more. I have to budget time better, type a little here and there, plan stuff out. But even—“

“I’m so sick of hearing this every day.”

This time I insist on finishing. “But even you have to admit that it’s been better quality since I started doing it this way.”

There is a long pause. I sense his hesitancy to agree, his searching for a cheap way to snap back, to poke a hole in my argument and my soul.

“Better quality. I’ll give you that. Savor the fact that I’m agreeing with you. Of course, you could stand to pick it up a little.”

“No! Sure, you’re planning and editing more, but you and I both know that you don’t do it as often. The quality stuff comes, what, once every few weeks? What are you doing in between those supposed masterpieces? You sure aren’t working on them non-stop. You’re on those asinine friend sites or playing cheap games on your phone. No, don’t even bring up your family or your job or your spiritual direction crap, because you know that's not what I mean. You wonder why I ride your ass about doing this? It’s because if it wasn’t for me, you wouldn’t be writing anything.”

His icy glare says it all. He wasn’t prepared for my willingness to suggest that.

“You and I both know that that is not an option.”

I feel my courage growing. “It’s not? That’s not the first time you’ve said that, but you’ve never explained why. You’ve just always assumed that I’d accept it at face value. Why’s it not an option? Why don’t you take a crack at this stuff again? You care so much about doing this, how about throwing out some ideas the way you used to instead of making me do the work of two people?”

He chews the inside of his cheek for a moment. I take it as an invitation to keep going.

“You keep me chained to this machine like eloquent prose just magically happens and you never lift a finger to help. You show up, judge me, and leave. I’m the one doing all the work, and you swoop in to soak up the praise afterward. You need me in order to make you feel good, because it's the only reason you're around at all. If I ever stop, you cease to exist, and you hate the thought of that. So, how about I stop? How about I just quit, and kill two birds with one stone? I free up some time, and more importantly, I get rid of you.”

His incredulity remains during my entire diatribe, but by the end I can see a flash of panic as well. Feeling emboldened, I take this opportunity to reach for my cup and take a sip, complete with my own exaggerated slurp to punctuate things.

Unfortunately, my gesture seems to snap him back into form. He ambles over, setting his own cup down on the desk, and rests a hand on each arm of my chair so that his face is inches from mine. I smell the coffee on his breath. His eyes, brown and deeply familiar, hold my own.

“Do you think anybody would care if you stopped writing, right now? Do you think they’d notice? No, they wouldn’t. They’d find something else, other supposedly profound insights to occupy a few minutes of their time each day. If you stop writing, they stop caring. Go ahead and test me on this. Let things go for even a week and watch the attention evaporate.

“The fact is that you want, you need the praise as much as I do. You need it to know that someone notices. I’m helping you stay relevant. I’m helping you stay alive. And you’ve never thanked me, never acknowledged that my role does make a difference in this relationship. That’s okay, so long as you keep doing what you do in order for both of us to get what we need from the rest of the world.”

He holds my gaze for a few more seconds before straightening up and gingerly grabbing his mug.

Backing up a few steps, he turns and vanishes a moment later. I turn back toward the computer, his words a brutal echo in my thoughts. I look at the screen and watch the words in silence. After a moment, I resume typing, my coffee slowly going cold.
By Jeff Nelson
Email ThisBlogThis!Share to TwitterShare to FacebookShare to Pinterest
Labels: Blogging
Newer Post Older Post Home