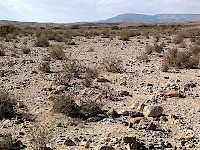 Yesterday was the 7th anniversary of my ordination. It was on that day seven years ago that I took the vows I've been trying to live into ever since. It was yesterday that I was sent a message by a colleague inviting me (and others) to reflect on Jesus' time in the wilderness. He suggested that Jesus spent those 40 days being tried and tempted while working out his vocation, and invited all of us to reflect on how we are tried and tempted while doing the same. It also happened that I've been invited to reflect on Jesus' wilderness time during my Ignatian Exercises this week. All this together, my spiritual director will no doubt say later today, was less than a mere coincidence, with which I'll not disagree.

Anyway, as I ponder my ordination this week, I've been thinking about such temptations, but also clarifications that have come over these seven years, and figured I'd blog both.

1. Leave before the job is done. At the sign of resistance, frustration, boredom, or general ruttedness, it's tempting to seek out the supposedly greener grass elsewhere. But I have learned over and over to wait it out, to see what happens, and to try new things. Every time so far, it's become clear that I'm not done where I am. I've received this piece of advice from more than one colleague much more seasoned than me: "Don't be in a hurry to leave." This comes from pastors who thought they were heading for better situations and got burned when they got there, so they know, and their point is well-taken.

2. To try too hard to seem like a Regular Guy. I hate the exchanges at get-togethers that are variations on this: "Killians, please." "You're a pastor and you drink beer?" Yes, I like normal things. No, I do not spend 23 hours on my prayer cot in the church basement with an hour off for lunch. For a while I really went out of my way to prove this to people, and I think it was at the expense of my role, my sense of pastoral identity. Obviously there are changes that this vocation calls for, but there are ways to infuse it with who you are.

3. Making the church your "first mistress," to borrow a phrase from Ray Carroll. It's very easy to make the church the center of your world at the expense of your family, your social life, yourself. Whether you're doing it to appease your toughest critics, or justifying it theologically, or just a workaholic, it easily leads to burnout, misconduct, and/or major familial problems.

1. I love counseling and mentoring others in ministry. I love leading discussions, I love talking one on one, I love serving in various ways on my Association's Church & Ministry Department. Down the line, I'd like to pursue this interest perhaps in a different kind of ministry, but for now doing it as a local church pastor is what I'm meant to do.

2. I started this blog shortly after beginning my first settled call, and it has become for me something essential. Through this medium I've become aware of a love of, even a calling to, write. I've had a few things published over the years, and I'm feeling the itch to write in an even more serious way than that. But I'm still in the early stages of such things.

It's been quite a journey these past seven years. What will tomorrow bring?
By Jeff Nelson
Email ThisBlogThis!Share to TwitterShare to FacebookShare to Pinterest
Labels: Ministry, My Journey (so far), Spiritual Direction, Spirituality
Newer Post Older Post Home