Death and Life and In Between 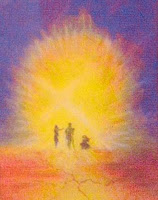 I've officiated three funerals since the end of January. Actually, I've officiated four. The first was in a community a good half hour or more away because they specifically wanted a UCC pastor and the ones closer to them weren't available. The next two were the sort of "lived a good long life" funerals of church members who had, indeed, lived good long lives.

The fourth was just yesterday. I can't really say that it was a "good long life" sort, as she was only 59. Hers was a good life that included a good long fight with cancer, but arguably this life was not long enough as is often the case with that disease. As I recount my thought process when writing the eulogy, two things stick out. First, I originally wrote about "her cancer," but decided that cancer is not really ours. Instead, it is an intruder, an unwanted guest, a foreign despicable thing. So I left out the "her." Second, the longer I'm here the more regularly I break down in the middle of writing these things, and the closer I get to breaking down in the middle of giving them. That's just the nature of ministry, I think. In a way I should be thankful to have developed such relationships.

There has been something about these funerals that have brought me to a more reflective moment regarding ministry. It's nothing bad or alarming. I've just been experiencing a time of thankfulness and joy and wonder about my calling. It's not that I stopped, it's just that I'm especially mindful of these things within me right now.

I've also been reflective in this week leading up to the observance of Transfiguration Sunday. The Road to Easter, as I've personally come to call it the past few years, is about to begin again. I feel a wonder around this as well, anticipating the self-reflective time that marks this holiest season and, eventually, that most joyful celebration. I want to write more about that before Ash Wednesday. For now, I'm just sitting with the anticipation; the sense of renewal that it seems to be causing within me.

I turn 33 next week. I don't have any profound insights about that. Sometime, somewhere, I read somebody's musings on turning 33 and it being scary or significant or whatever because that's the (approximate) age of Jesus when he died. I don't feel any reservation or high honor or anything regarding that. I may have dreamed reading that little freak-out piece to begin with. It doesn't really matter. I get to spend the morning in Association meetings, and then Coffeewife is taking me to lunch. And also cake. That's fine, that's enough.

All of this is to say, I guess, that I'm thinking a lot at the moment about death and life: those of beloved congregants, my own, Jesus'. These are all kind of wrapped up together in my head and in my spirit right now. It's just been a time when I've been moved to a prayerful, joyful, even peaceful sort of silence. And I guess writing any more about it might ruin it, so I'll stop.
By Jeff Nelson
Email ThisBlogThis!Share to TwitterShare to FacebookShare to Pinterest
Labels: Church, Ministry, My Journey (so far), Quotidian
Newer Post Older Post Home