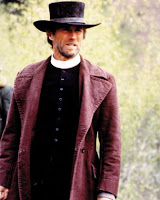 Last year, I wrote three posts musing on the meaning of vestments and clerical shirts. If you feel like reading them either for the first time or once again, they are here, here, and here.

When a conflict or disagreement arises in ministry, I often say to myself, "this is not about that," meaning that whatever the stated surface-level issue is, it's not the deeper issue that an individual or entire church is wrestling with. Instead it's only a tiny part of the story or, more likely, a distraction from the real issue. Those posts were certainly meant to wrestle with why I as a pastor wear what I wear in my position, but the deeper issue that I only touched on had more to do with my sense of call. If I am an ordained pastor in the United Church of Christ, charged with certain responsibilities among a community of ministers but also to embody a particular role in the world, how might I best "dress the part," as it were?

The clothing issue became a specific aspect of the larger question. But it's a good one to tackle.

If pastors, as many do, wear robes, albs, stoles, and/or clerical shirts, then they are embodying a certain theology of the pastoral office. These items of clothing communicate formality, and show the pastor to be clearly set apart for particular functions within the community. When wearing such things, there is no mistaking who the officiant is.

If pastors, as many do, wear suits and ties for worship, they are embodying a different theology of the office, though I'd argue still a more formal one. You may or may not be able to pick the pastor out of the crowd until s/he steps up front to lead worship, but there is still a communicated respect for the role: even though these traditions reject certain views of pastor and church (or at least those specifically related to dress...there are certainly pastors who command a great deal of authority and power while not wearing robes and collars), it is still important for the pastor to dress more formally as part of his/her role.

And if pastors, as an increasing number do, wear jeans or other much more casual styles, they are embodying yet another theology of the office, that being one meant to identify much more closely with the people s/he is serving or to otherwise appeal to people seeking a church that has rejected formality, which is seen as stuffy, boring, or too strict by those seeking such a community. The downside is that, unless said pastor leads a large church and has his or her face plastered all over church literature, s/he may be the last person in the room a visitor would guess is the pastor. At least a portion of that, perhaps, is intentional. The pastor is "down with the peeps," as a fellow blogger and pastor has phrased it.

Now, these are simplified definitions and there is room for pushing back and arguing for nuance (a pastor can be informal in other ways while wearing a robe, a pastor can act formally in jeans, etc.). However, my basic point is that each of these dress styles is meant to communicate and incarnate certain things in relationship to the pastoral office. I offer them in brief so that I can comment on them without getting too tied up in hair-splitting, so I hope you won't miss the forest for the trees.

I've been wearing clerical collars in worship and sometimes to hospitals for nearly a year now. You can see from those other posts how much I weighed the decision to do so. It was just a few months after I began wearing them that I had a conversation about my wearing a collar with a church member, during which she made the comment, "It took you a while to grow into it." I don't think she meant the collar itself, but the idea behind it: its symbolism of the office and its authority. The collar was to her representative of a more full acceptance of the role that she'd been able to observe but to which I'd been mostly oblivious.

As mentioned in previous installments, I was inching the other direction right before making the decision to wear clericals. I wanted to be the "down with the peeps" guy, the guy who's accessible to the tattooed punk who comes in off the street looking for Jesus. I, as many other pastors have, decided that I wanted to be the hipster pastor in jeans who's all, "What up, bro?" Like I said, there are ways to do that in clericals. There are ways to do that without being the 40-year-old pastor preaching in a Mickey Mouse t-shirt.

I've come to a point since donning the collar where I don't feel the need to try so hard in that sense. It's probably part of a larger moment for me, but I don't have the felt need to pretend that I'm still in my 20s. I want to mature in my sense of call and my sense of self, one outward expression of which is my manner of dress. I love jeans and hoodies, but I've decided to show a little more professionalism and self-respect during my work hours. This, I think, translates to those who come to see me. A mentor once told me the story of visiting someone in the hospital while wearing a tie, during which the patient said, "It showed me that you take me seriously."

As for accessibility? I think of other people who wear uniforms: doctors, nurses, police officers. There are ways that they relate to people they come in contact with while still respecting and honoring their white coat, scrubs, or badge. Pastors can do this, too. My favorite example is Nadia Bolz-Weber, who dons clericals and robes but whose personality is certainly not the stuffy, straight-laced sort that one might assume with such attire. Does the tattooed punk need me to dress a certain way, or more to approach him a certain way, welcome him, take him seriously? I've had my experiences with dressed-down religious folk who probably wouldn't. The clothes don't always make the person in that sense.

I'm thankful that I've become more comfortable in my own skin regarding my call. It's not that I wasn't before, but that I wrestled really for a couple years about accessibility and how to best express my calling in outward ways. I can't hide in a collar. Instead, I can only claim who God wants me to be. I choose to claim it, to act my age, and perhaps most importantly to live into my ordination: to be set aside for certain things but to do those things in a way that invites rather than alienates.
By Jeff Nelson
Email ThisBlogThis!Share to TwitterShare to FacebookShare to Pinterest
Labels: Clericals and Vestments, Ministry, My Journey (so far)
Newer Post Older Post Home