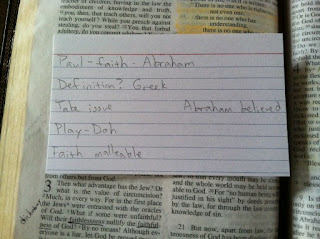 To the left are my sermon notes from March 4th. The text was from Romans 4, during which Paul used the story of Abraham to make some points about faith.

I usually have a longer outline with me in the pulpit, but for some reason leading up to that Sunday I wanted to leave that in my office and instead just take a notecard with a few scribbles along. This was a technique I learned in my freshman speech class in college: write a longer outline, but just write some keywords on a card and go. The assumption is that you know the longer outline well enough that you only need a few keywords to remind you of your next point. This is meant to translate to a more natural style of speaking that is less dependent on words on the page.

I'm my own worst critic, so I may not be the best judge of whether the actual preached thing was worth much. I remembered all my points and I made it from beginning to end, so hopefully I said something that somebody could use.

My real point in bringing this up is that I've been seeking something more free in my preaching. Don't get me wrong here: I don't want to get up for 20 minutes or more trusting that the Spirit is going to give me something on the spot. That's not what I'm about here at all. I think it's important to do your homework, get your ducks in line, know your stories, know your points, know your theology, know your people. A good sermon knows what it wants to do. It's not, from my perspective, an experiment in stream-of-consciousness rambling that's meant to pass for divine inspiration.

And yet all I wanted to have on a particular Sunday was a notecard, which certainly opened the possibility for a series of endless rabbit trails. But behind the couple of words were text study, a story, a purpose. I just wanted less of a tether, less of an attitude that I have to say this thing in this way or else the whole exercise is a failure.

This is the "free and controlled" style of preaching I've been trying to master for years. As Gordon Atkinson recently put it, you never really master preaching but instead continually learn how to do it. If you include sermons I prepared in college before receiving any real formal training, I've been preaching now for 15 years and I'm still trying to figure it out.

I don't know whether my notecard use will be a long-term practice. Like so many other ministry practices, I like it at this moment and it serves a purpose. I may even carry the longer outline to the pulpit; I may think it's not working already. Whatever the case, I am continually after this elusive free and controlled way to deliver a message to the congregation and have it be something engaging and memorable.
By Jeff Nelson
Email ThisBlogThis!Share to TwitterShare to FacebookShare to Pinterest
Labels: Ministry
Newer Post Older Post Home