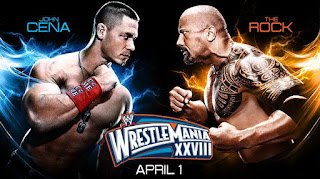 I'm still reading Dark Night of the Soul by St. John of the Cross, although it is much slower-going than it was a few weeks ago. And...uh...that's all I got for that right now.

WWE Wrestlemania 28 happened on April 1st, and we watched with gusto. There were hits and misses, as every Wrestlemania has. Daniel Bryan vs. Sheamus was all of 18 seconds long with Sheamus becoming the new World Heavyweight Champion, but it was one of those strange things where Bryan seemed to benefit more from it: there were chants for him the rest of the night and the following night on RAW, particularly his now-signature "Yes! Yes! Yes!" Undertaker/Triple H was less a match and more of a drama, as the story was bigger than the specific moves. Eventually, Undertaker extended his Wrestlemania undefeated streak to 20-0 and the three involved (Shawn Michaels was the guest referee) had a great final bow together afterward. Chris Jericho and CM Punk also put on a great match, although the storyline was a bit overcooked. And then of course there was John Cena vs. The Rock, a year in the making, to close things out. I was pleasantly surprised when Rock won, and he indicated on RAW that he isn't done yet. All in all, it was one of the more enjoyable Wrestlemanias that I can remember.

I've had the WWE: Greatest Rivalries - Shawn vs. Bret sitting on my DVD rack for a few months now, and finally got around to watching it. This features Shawn Michaels and Bret "Hitman" Hart sitting down together and recapping their time together in the WWE in tag teams and then as singles stars, including their storyline and real life rivalry through the 1990s. The most infamous moment in this rivalry was the incident known as the Montreal Screwjob in November 1997 at the Survivor Series, where the WWE Championship was taken off of Hart in a finish rigged by Michaels and owner Vince McMahon (as in really rigged, not wrestling rigged). They of course talked about this at length, with both men showing remorse that things ended up that way. The whole interview and recap was quite interesting and revealed a lot that I and many others didn't really know had gone on behind the scenes.

I watched the premiere of Don't Trust the B---- in Apartment 23 this past week. We meet June, who moves to New York City from rural Indiana only to find that the firm that hired her has collapsed. She ends up finding Chloe for a roommate, who it turns out schemes the first and last month's rent from a revolving door of roommates before acting so crazy as to get them to leave. June and Chloe come to an understanding over the course of the episode, but I'm sure that that understanding will be tested in the future. Also featured is James Van Der Beek as himself, who happens to be Chloe's best friend and who comes and goes to provide laughs. The comedy of the show strives to be in the vein of what Arrested Development, Better Off Ted, and The Office did before it, although I'm not completely convinced that they're doing it well. I'll probably need a few more episodes to decide.

I just discovered The Kills this week, to which some may say, "What took you so long?" I know, right? Anyway, here's the video for their song "U R A Fever:"

And here's a video called "Where the Hell is Matt?" I'm apparently late in discovering this as well. Watching it makes me happy.