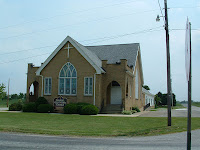 Late last week, I took a trip out to the church and house that I knew in elementary school. I've been collecting pictures of all the churches I knew before graduating high school--five in all--and this was the last one that I needed. It's also the only one whose picture I can't find anywhere online. Fortunately, since I don't live that far away from it, I decided to drive out and snap some pictures of it myself.

For those who haven't been reading as long, this church is the one that inspired this earlier blog post. That memory is the primary one I associate with this place, so there was a certain sense of dread and anxiety that I felt during my drive. Would anyone be there or recognize me? I just wanted to take pictures and leave, after all.

Strangely enough, those feelings lessened the closer I got. After passing over a particular road in the city closest to it, instincts and comfortable feelings from many years gone began to take over. I hadn't been out this way for a very long time, but the route came rushing back to me. I remembered the turns, the road names, the landmarks. What I saw along the road--barns, fields, corncribs--hadn't seemed to change much over the decades, or I had never paid close enough attention.

As I came up on the neighboring tree farm, I began to look for the church. I knew that I'd be able to see it once I made it to a certain stretch of the road. To my surprise, I saw it a little earlier due to the massive new addition to the back of the old brick structure with which I was more familiar. As I pulled into the parking lot, I had to take a moment to process everything that I saw: again, the addition that seemed from the outside to be a new fellowship area, the picnic pavilion that replaced the gravel lot I'd grown up playing on, the extended parking lot now replacing the wide open front yard on which I'd played all manner of games. The three big crosses in the parsonage's side yard with lights trained on them for the evening hours. The front facade of the house had changed as well: gone were the big bushes I liked to hide behind. The evergreens along the side of the road had become massive and didn't seem to be well-pruned.

It was quite impressive, really. Enough time has passed that I didn't spend these moments cursing this place under my breath. Instead, I experienced a moment of clarity and peace. For all intents and purposes, this had been my childhood home. It had changed dramatically in 20 years, but that's to be expected.

I finally stepped out of the van and hurried across roads on which I once road my bike to begin taking pictures. I used to play behind that church sign. I used to run around under those trees. I used to play baseball up by that neighboring farm. There was a peace and familiarity to those moments; a thankfulness for what this place had been to me that overtook those final memories that have dominated my thoughts for so long.

There was a van in the parking lot, though of course I couldn't say who it belonged to. It could have been the current pastor or someone else preparing something for the weekend. Nobody came out to greet the guy with the camera. Maybe I wasn't even noticed. Would it have made a difference to know who I was? I don't know that.

Since I was in the area, I drove the extra few miles to my elementary school. I knew that its days of actually being a school were behind it, as the district had taken steps to build new structures all on one campus, as has been the trend in many communities. The last I heard, it was being converted into a bed and breakfast, though I can't remember where I heard that.

As I pulled up, I could quickly tell that it wasn't a bed and breakfast. A large iron fence had been erected long the front, and other gates had been set up across both entrances to the parking lot. Signs made it clear that this was private property and there was to be no trespassing. I only stayed long enough to notice the overgrown grass on the soccer and baseball fields, the backstop looking worse for wear. The building itself didn't seem to look too good, either: the bricks were worn, the paint on the wood trim was peeling and dirty. This was the physical remnant of my elementary school years. Visiting the church seemed to provide a moment of closure, but seeing this caused me to cling to memory rather than current reality.

That evening as I waited for Coffeeson to fall asleep, I opened my laptop and turned on Spotify. I've been on a minor Ekoostik Hookah kick recently, so I began playing one of their albums on my earbuds as I did a Google search for my elementary school. I was looking for news, maybe some movement to preserve or restore it, or maybe an account of what it's being used for now. The best that I could find is that it had been, and perhaps still is being used as a martial arts dojo. Well, that's something, I thought. Maybe the inside looks better than the outside. I also found a brief history of the school district, which I didn't really know much about.

The only other site I found was somebody's Flickr account on which they'd posted more than a dozen pictures of the building, including a few engraved stones that can be found indicating that it was originally a high school and another indicating a gift from the class of 1932. As I slowly perused these photos, a song called "Ohio Grown" began playing, and memories of these years happily made their way back to my conscious thoughts.

There was a period of time when I didn't like admitting to people that I'm from Ohio. I'd talk about being born and partially raised in Michigan with much greater pride, and I'd wear my years in St. Louis like a badge of honor; as if I'd escaped if even for just a little while. This trip, these moments of resolution near my childhood home, and the sadness that I felt at my school, helped me to see fully that I have much to be thankful for in and around this state. I am who I am thanks in part to these places. There's no use denying it or passing it off as unimportant. Instead, it's worth much more to embrace where I've been and realize how it's still a part of me, for better or worse.