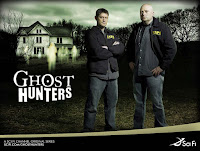 There isn't going to be a whole lot to this one, as I really haven't seen, read, or heard enough to warrant one. But it's the day that I do it, and I have nothing else to post, so...

We watched Ghost Hunters this past week, which featured the last investigation in which TAPS co-founder Grant Wilson would participate. They chose the bed and breakfast that Grant co-owns as a way to have a nice, relaxed time with his team and friends. They seemed to find plenty of stuff: voices, doors closing on their own, etc. And then these New Englanders, these Rhode Islanders, shared the stiffest, most awkward series of goodbye hugs I've ever seen. But really, I make fun of this show a lot for how staged the conversations always seem to be, and this just took it to a new level. Anyway, I'm sure Coffeewife and I will keep tuning in, as I don't think the show relies on the cast's personalities.

And here's a song by Dave Matthews and Jurassic 5 called "Work It Out:"

See? That's all I got. Have a great weekend.
By Jeff Nelson
Email ThisBlogThis!Share to TwitterShare to FacebookShare to Pinterest
Labels: Pop Culture Roundup
Newer Post Older Post Home