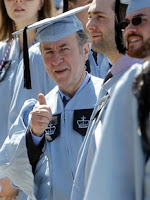 New god, same as the old god. Jan at A Church for Starving Artists reflects on how much she worships money:


Gac Filipaj  - who worked his way through Columbia working as a janitor a la Good Will Hunting – majored in classics.  After Ms. Norris noted that majoring in classics is not exactly a lucrative course of study, Mr. Filipaj responded this way:

You were born in United States and you speak money first.  . .  I’m not doing it for the money.

What are we doing for the money?  And is it worth it?

Money is a good tool for sustaining ourselves and others, but it’s a terrible god.  If it rules us – and it rules many of us – life will sour,  sooner or later.  I haven’t heard any graduation speeches highlighting this particular truth, but – really – life is much sweeter when money doesn’t control us.

That line from Filipaj gets me as it gets Jan: "You speak money first." I'm as caught up in this trap as anyone else. And like Jan, I rationalize by pointing out that I have a mortgage and a small child and a bunch of other expenses that I tell myself I need. And really, some of it is important to me: life insurance, health care costs, car maintenance, and the list goes on. Part of that is my own rationalization, but part of it is my being caught up in American economic realities where I'm not only told that I need all these things but society makes it awfully difficult to function without them.

While trying to keep up with all of this, it's almost as if money becomes our god overnight while we're sleeping. 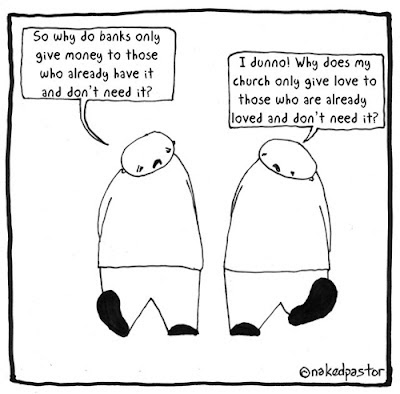 
When Jessica was pregnant with Elias, we did a lot of house cleaning and while going through a lot of boxes full of old music, I found that Fleming & John album again. I put it in my car’s CD changer. Soon after, I listened to that album again. It took me a while to get past the first song–“I’m Not Afraid”. Because I love that song. But eventually, probably by accident, I let song number two–”Break the Circles”–play. As a twenty-something, I liked the song. But it wasn’t a favorite. But then, perhaps because I was a husband now and a soon-to-be father, I pushed “repeat”. And then I pushed it again. And again. And at some point, I began wiping tears from my eyes.

Listen to the song at iTunes here: “Break the Circles” by Fleming & John.

I have no idea how many times I listened to that song. And then I thought and prayed. God, what circles do I need to break? What story threads from my past might I pass on to my kid? What big and small threads of my storyline could eventually have negative affects on Elias? What parts of my father’s father’s identity affected my childhood that could affect the identities of my children?

Turner hits a nerve with this post. I frequently reflect on this general topic. What attitudes and behaviors from my past might I already be passing on to Coffeeson? Hopefully some of them are good: love of music and baseball and such would be great.

The things I worry about are more along the lines of how many times he'll be moved and how many school systems he'll know. I've shared this worry often on here. And it's not just because I've discerned the same vocation as my father but because I'm conditioned to expect a move and new beginning every once in a while. Will Coffeeson know that reality as well?

The refrain is, "We gotta do much more than believe if we want to see the world change." Amen.

Misc. Jamie turns Mother's Day around and reflects on what her kids have taught her. Rachel Held Evans interviews a pagan. Martha answers the "fence in the gays" preacher. Brian concocts a fiendish plot to remove piped-in music from Michigan Stadium, and gets a Mike and the Mechanics song stuck in your head in the process.
By Jeff Nelson
Email ThisBlogThis!Share to TwitterShare to FacebookShare to Pinterest
Labels: Church, Fatherhood, Funny If It Wasn't So Sad, Small Sips
Newer Post Older Post Home